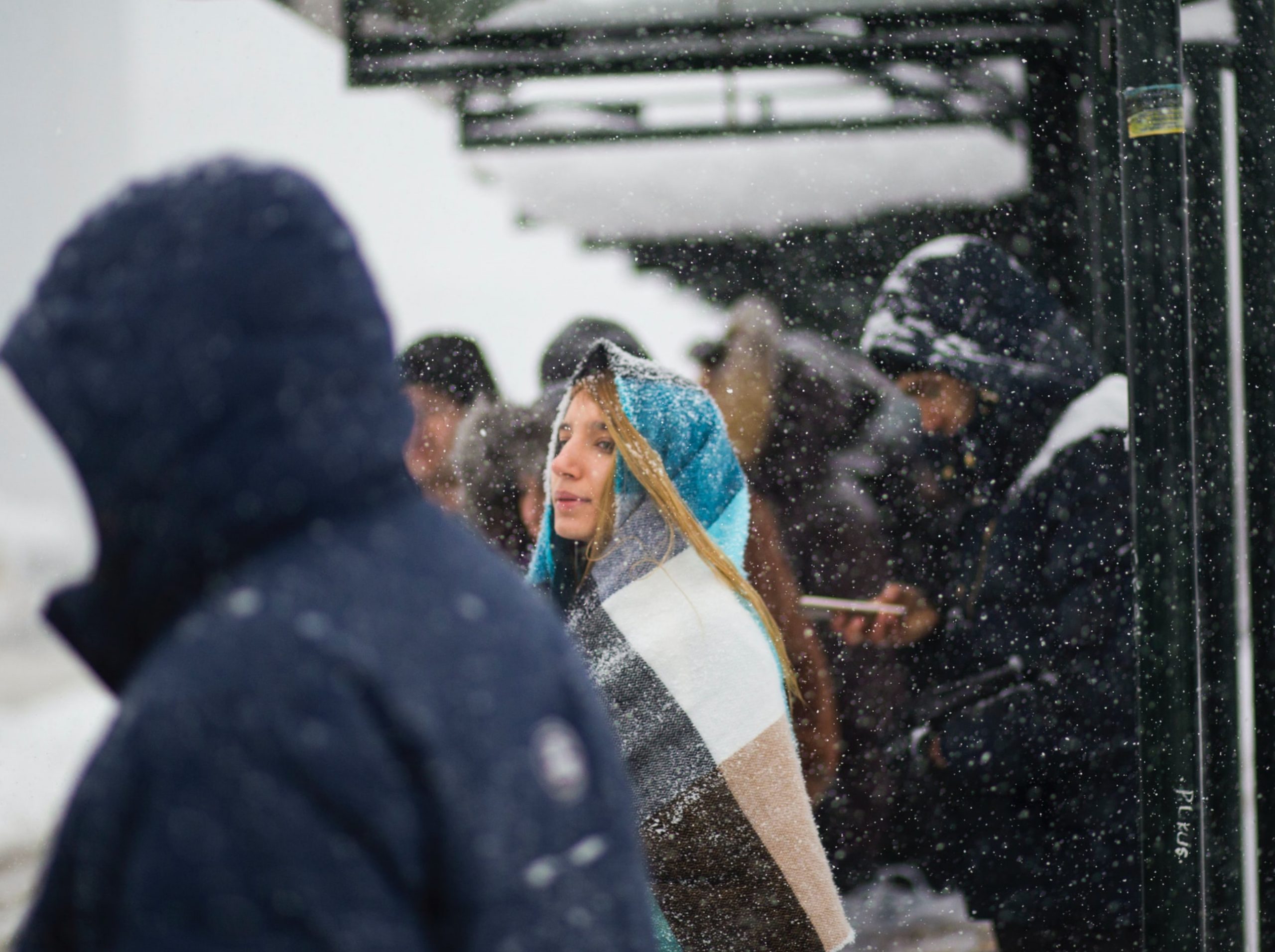 16 Apr Stations of the Resurrection No.3

Posted at 09:05h in Poetry, Prayer and Meditations by Br Jonathan

John 20. Verses 11 – 18
Mary stood weeping outside the tomb. As she wept, she bent over to look into the tomb; and she saw two angels in white, sitting where the body of Jesus had been lying, one at the head the other at the feet. They said to her, ‘Woman, why are you weeping?’ She said to them, ‘They have taken away my Lord, and I do not know where they have laid him.’ When she had said this, she turned round and saw Jesus standing there, but she did not know that it was Jesus. Jesus said to her, ‘Woman, why are you weeping? For whom are you looking?’ Supposing him to be the gardener, she said to him, ‘Sir, if you have carried him away, tell me where you have laid him, and I will take him away.’ Jesus said to her, ‘Mary!’ turning, she said in Hebrew, ‘Rabbouni!’ [which means Teacher]. Jesus said to her, ‘Do not hold on to me, because I have not yet ascended to the Father. But go to my brothers and say to them, ‘I am ascending to my Father and your Father, to my God and your God.’ Mary Magdalene went and announced to the disciples, ‘I have seen the Lord!’ and she told then that he had said these things to her.

It’s hard for us to realize that the Gospels weren’t written as history as we know it. The concern of the writers wasn’t to convey accurate historical facts but rather to point people in the direction of the meaning – hence the huge discrepancies between the four Gospels. Each Gospel writer was writing with a different purpose.
In the Fourth Gospel – John – Jesus’ public ministry begins with him asking two disciples of John the Baptist a question: “What are you looking for?” “Rabbi,” they answered, “where are you staying?” – or in older translations, “Where do you abide?” – and the rest of the Gospel is the answer – a series of ‘signs’ for those who are truly searching to follow. We hear the answer most clearly spelled out in Jesus’ prayer to the Father in Chapter 17: ‘As you, Father, are in me and I am in you, may they also be in us … that they may be one, as we are one, I in them and you in me, that they may become completely one, so that the world may know that you have sent me and have loved them even as you have loved me.’ Words most Christians are very familiar with – but how deeply have we explored their meaning and implications. John poses the question to each of us: “What are you looking for?” What do we really seek in life? – and are we prepared to discover ourselves inextricably caught up in God?

Now we have this story of Mary Magdalene. We know it so well – on the surface – but let’s look a little deeper.

Let’s begin with her name. Had you noticed that there are only two [or three if you count Simon with his nickname ‘Peter’ (the rock)] of Jesus’ followers with two names: Judas Iscariot and Mary Magdalene? Dig deeper: Iscariot – derived from the word sicarius, which means political assassin, and we know the role he played in the story; might the name ‘Magdalene’ tell us something of the role she plays in the story? I was brought up to think it was just another way of saying ‘Mary of Magdala – the village from which she might have come,’ but nowhere in the text is she referred to as ‘Mary of Magdala’. It’s always Mary Magdalene.

In Hebrew script there are no vowels, only consonants. The word migdal, as used in the Hebrew scriptures, is translated as tower, a high structure from which a shepherd watches over his flock. The way this is written in Hebrew is m-g-d-l, the same way one writes ‘Magdalene’ but with the ‘n’ added to make it a name. Is it too fanciful to think that the writer might be alerting us to Mary’s future role?

But back to the story. It was dark when Mary went to the tomb. “She was in the dark” about the meaning of it all. What about us? How ready are we to admit that we are “in the dark” when it comes to the things of God, and even the meaning of life itself?

Mary came to the tomb, thinking it contained the body of ‘the Treasure’ she felt she had found, the one she loved. Though it was dark, she could see the tomb was empty – she had stooped down to peer in. But then there was light! Enough light to see the two angels. Light was beginning to dawn. Ponder the metaphor of stooping down; “She bent over to look into the tomb”. Bending over – bowing down – humbling oneself – and the light was growing.

Mary was weeping. We are left in no doubt about that: we are told four times. She was grieving, not just for the death of the one she loved but from despair for the loss of all he had stood for, all the hopes that had given her energy and purpose and a new sense of her identity. At this point Mary assumes that Jesus was limited, as any human being, and death has put an end to him and his vision for how life might be, and her relationship with him. Might we take a few moments to look at the griefs we normally keep hidden away? How do they relate to ‘what we are looking for’?

‘She turned round’ – eyes full of tears – and saw Jesus standing there, though she didn’t recognise him. “Do you turn to Christ?” – the first question in the Baptism service. “I turn to Christ”, we answer. But who do we see? Who is Christ for us? For me? Do we identify him with the popular picture of Jesus we get from a superficial reading of the gospel stories, or is he big enough to be creating the Universe and intimate enough to be closer than the air we breathe?

‘Jesus said to her, “Mary”’ – he used her name, but it would have all the warmth and intimacy and understanding she had always found in him. Imagine the flood of relief. He was alive. Death hadn’t deprived her of all she most treasured – all that had given her a new sense of who she really was. As one commentator puts it: ‘She is known and loved; she has entered a new mystical awareness.’ The relationship wasn’t broken, but she still has to understand the meaning.

Things are different now! ‘Do not hold onto me because I have not yet ascended to my Father!’ Don’t cling on to the old, limited, Jesus you used to know. As Ann Lewin puts it in her short poem, ‘Easter morning’:

Do not cling…
Let me be bigger than your
Heart can hold.
Rise with me to a
Larger vision.

‘And turning, she said…’ The NRSV translation misses a subtle point here when it says, ‘She turned and said…’ The Greek uses the present participle – ‘turning’ – and this is echoed by what Jesus goes on to say when he tells her to go to say to his brothers and say, ‘I am ascending to my Father and your Father, to my God and your God.’

Something new is happening. Rather than being limited to the physical body of Jesus, the Christ-life , and awareness of it, is beginning to move out: first into Mary Magdalene, and then to the Apostles and on into the infant Church, until St Paul is able to articulate the new reality: ‘We are the body of Christ’, and even to say, ‘It is no-longer I who live but Christ who lives in me.’

This is the reality we are caught up in. “Lord, give us the desire to explore the deep meaning of this and to grow more and more into the reality of your prayer for us.
“As you, Father, are in me and I am in you, may they also be in us, so that the world may believe that you have sent me. … that they may be one, as we are one, I in them and you in me, that they may become completely one, so that the world may know that you have sent me and have loved them even as you have loved me.” And note – it is the world and not just ‘the Church’ that God loves and wants to know it.