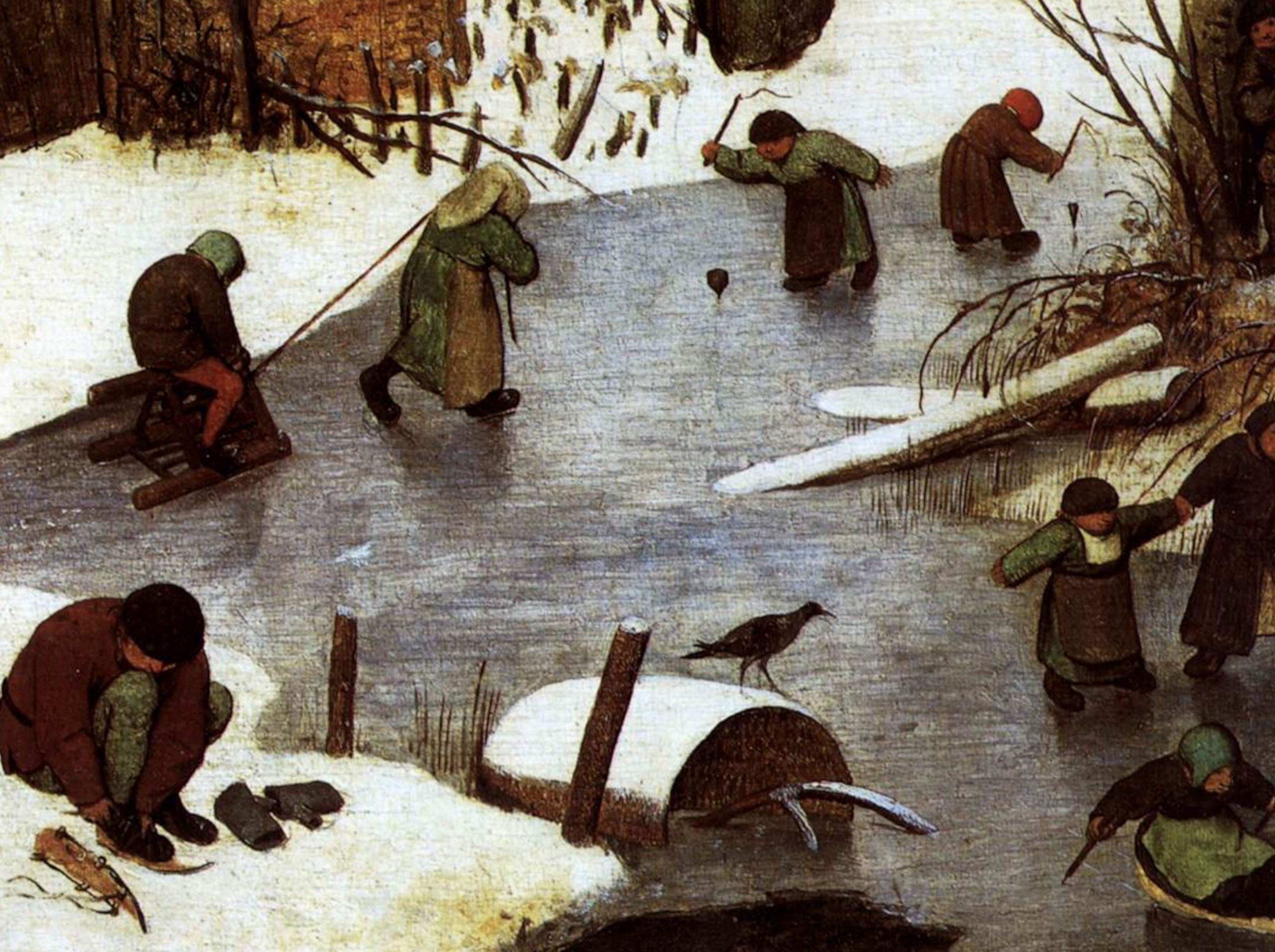 Posted at 20:52h in Sermons by Br Jonathan

In 1566, following one of the harshest winters in living memory, the Flemish artist Pieter Brueghel produced a work entitled The Census at Bethlehem, which now hangs in the Museum of Fine Arts in Brussels. It’s one a group of landscape paintings for which Brueghel is perhaps best known, and depicts a snow-covered Flemish village at sundown on the eve of Christmas. Choosing to focus, not on images of ideal beauty or pious religious subjects, but on the common lump of humanity, the canvas is populated with stocky, well-clad peasants going about their ordinary lives. It’s a sort of forerunner of Where’s Wally.

Many of the figures are enjoying the weather: a frozen river hosts sledgers, skaters and snowball fights, and young children play with their spinning tops on the ice. A makeshift bar has been set up in the hollow of a tree; pigs are slaughtered, leeks are harvested, kindling is cut. A leper leave his house, which is in the middle of the village, carrying a clapboard, to warn people of his approach. But our attention is drawn to the bottom-left of the painting, where a crowd is gathered around the census-taker, who writes in a ledger with one hand and receives money with the other. Approaching them on the back of a donkey, inconspicuously, is the Virgin Mary, led by Joseph on foot.

It’s a cosy, tenderly observed and joyful transposition of Luke’s birth narrative into what was contemporary Flanders. But look closer and you notice small details that point to the fact that not all was well. The census-taker sits underneath a sign depicting the double-headed black eagle of the Hapsburgs, and a row of soldier’s lances are lined up outside the pub. Within two years of Brueghel finishing the painting the northern provinces of the Netherlands would revolt against Hapsburg rule, provoked by religious persecution – they were mostly Calvinists – and high taxation. And it’s worth pointing out that censuses, like that taken by Quirinius in 6 AD, were originally devised to aid in tax collection. And like Quirinius’ census, which provoked a rebellion led by the newly-formed Zealots, they were much resented. Do those pigs being bled to death just feet from the census-takers desk carry a symbolic significance? Almost certainly.
Brueghel is an incarnational artist; that is to say, he dismantles the distinction we still tend to make between the secular and the sacred. Here Joseph and Mary are Flemish peasants among Flemish peasants. ‘Their prince shall be one of themselves; their ruler shall come out from their midst’, in the words of Jeremiah.
He understood that the birth of Jesus was a political, this-worldly event as much as a metaphysical one, and inscribes his portrayal of it with messages of resistance and liberation.

The same can be said of Luke’s gospel, which takes a particular delight in undermining the powers that be. He situates the birth of Jesus, both in time and place, with reference to the Emperor Caesar Augustus – the object of an imperial cult during his lifetime, deified after his death, and widely regarded as the providentially-sent saviour of the world, bringing peace to people on earth. An inscription found at Priene, in modern day Turkey, famously describes his birth as glad-tidings. The Greek word is evangelion, which we usually translate as gospel.

Yet Luke does this only to advance the counter-claim, which would have been ludicrous to any educated Roman, that Jesus of Nazareth, a non-entity from a remote corner of the empire, whose first bed was a feeding trough, and who would die the death of a criminal, was in fact the King of Kings and Lord of Lords, to whom all earthly authorities would make obeisance. But it was this belief which would give courage to the martyrs who refused to compromise their faith when it came into conflict with their allegiance to Caesar. And there are of course still places in the world where being a Christian involves making stark moral choices, where the acclamation ‘Jesus is Lord’ leads to persecution, imprisonment and death.

But what about us, living in Western liberal democracies?

I know from personal experience of standing outside the Foreign Office with a megaphone proclaiming the kingdom of God that such behaviour is regarded by the authorities as nothing more than a bemusing nuisance. Our time may come of course, but at the moment, we inhabit a very different political landscape from that of 1st century Judea or 16th century Flanders. Yet looking at Brueghel’s work, I feel overcome with nostalgia, and a sense of lost freedom.

How, I asked myself, would he depict the same scene today? And you know, it couldn’t be done. Recent advances in technology have greatly accelerated the erosion of our public sphere – of our civic and communal life – to such an extent that a landscape painting would be inconceivable. The artist would have to show Joseph on his phone, filling in the census online. Even if he had to visit an office in person, there wouldn’t be a crowd of familiar faces at the desk, gossiping and playing games. He would stand in an orderly queue, under strip lighting, among strangers. And today they’d be masked and socially distanced. Meanwhile Mary is shown lying on the sofa, absorbed in the final of Dancing on Ice. Open on her laptop, alongside Amazon’s last minute Christmas deals, is her annual self-assessment for work, and several documents that she needs to fill in to evidence her latest outcomes. Then there’s the compliance stuff that still isn’t finished. She’s stressed because she didn’t meet her monthly targets this month. Joseph isn’t having a great time at work either. He has just had a disciplinary for making a joke at work that a colleague found offensive.

Mary watches celebrities skating on ice because no one would think of skating on the frozen river outside; and besides, the council have put a fence around it to stop people falling in. There’s no sound of children playing outside – that also carries too many risks. And needless to say no one keeps livestock. There is no contact with the messy business of food production, which – for everyone’s safety – takes place on conveyer belts in factories outside of town. Mary has placed her Xmas order with Ocado this year. She’s on a high-protein, low fat diet, and she’s put Joseph on the same one. Everything will be delivered to the door packaged, without defect or blemish. I could go on; there are so many activities in Brueghel’s work which today would be impossible. But you get the idea.

Just because we aren’t under the jackboot doesn’t mean we aren’t subject to oppressive and dehumanising powers.

The philosopher Michel Foucault has described the transition from what he calls sovereign power, a power based on the right to take away life (Herod would be a good, biblical example of this), to disciplinary power (typical of the institutions that sprang up in the 18th and 19th centuries, including prisons, hospitals and schools), and from that to what is sometimes called pastoral power: the dispersed ensemble of rationalities, discourses, disciplines and techniques by which human lives within a society are managed for their own welfare: the promotion of their prosperity, health, longevity, productivity and happiness. Examples are legion, and they include everything from advertising and surveillance to the calorie counts on our crisp packets. This power is not easily identified; not just because it manipulates our desires, but because it takes the form of enormously complex, de-centred networks of relations, with technology serving to make the net larger and the holes smaller.

It now looks as if Huxley’s Brave New World (1931), where tranquilized, genetically-modified citizens enjoy a painless, amusement-sodden, consumption-driven and stress-free consensus, has turned out to be a much more prescient novel than Orwell’s more famous 1984 (1948). Where there is no awareness of being enslaved, no rebellion is possible. In BNW it takes an outsider, a so-called savage, a naturally-born man, still subject to disease and the aging process, to witness to the truth. When he is extracted from the reservation on which he grew up and is introduced into life in the dystopian World State, he suffocates – both literally and figuratively. He ends up hanging himself.

A godless society can conceive of nothing worse – because there is nothing to transcend it – than suffering and death. But in trying to push it to the outer limits of consciousness and experience, it only places itself more firmly under the moral power of Death. The more incubated and virtual our lives become, the less freedom we enjoy, including the essential if ironic freedom to be unhappy and to suffer, without which there is no genuine creativity or vitality.

In the incarnation we see God emptying himself and assuming all the weakness, humiliation and suffering that characterises our humanity. He takes the form of a slave, and submits to death – even death on a cross – having resisted the temptations of worldly power, material satisfaction and a deathless immortality. On the cross Jesus taught us the paradox that ‘those who loves their life will lose it, and whoever hates their life in this world will keep it for eternal life’.

I don’t know if there is any existential equivalence between life in Casablanca during the 1940s and the life of faith, but I’d like to end by quoting from the autobiography of the Hungarian poet Gyorgy Faludy: “In this town, I thought to myself, Death sits among the guests at every feast and lies in bed with the lovers. He is present, always and everywhere, like in the woodcuts of Holbein’s Totentanz, but not in the same capacity. In Holbein’s works Death is the uninvited guest whose appearance causes terror and vain despair. Here, he is not regarded as a trap to be avoided…Here, they do not expect to live to a hundred and hope to live to be five hundred…Here, death is a welcome guest at the table of friends and when he sits on the edge of the lovers’ bed he does so only to inspire them to even more passionate embraces. Here, people have accepted the smell of decay and instead of holding their noses, they draw their conclusions and live more intensely, more greedily and yet more calmly’. Amen.