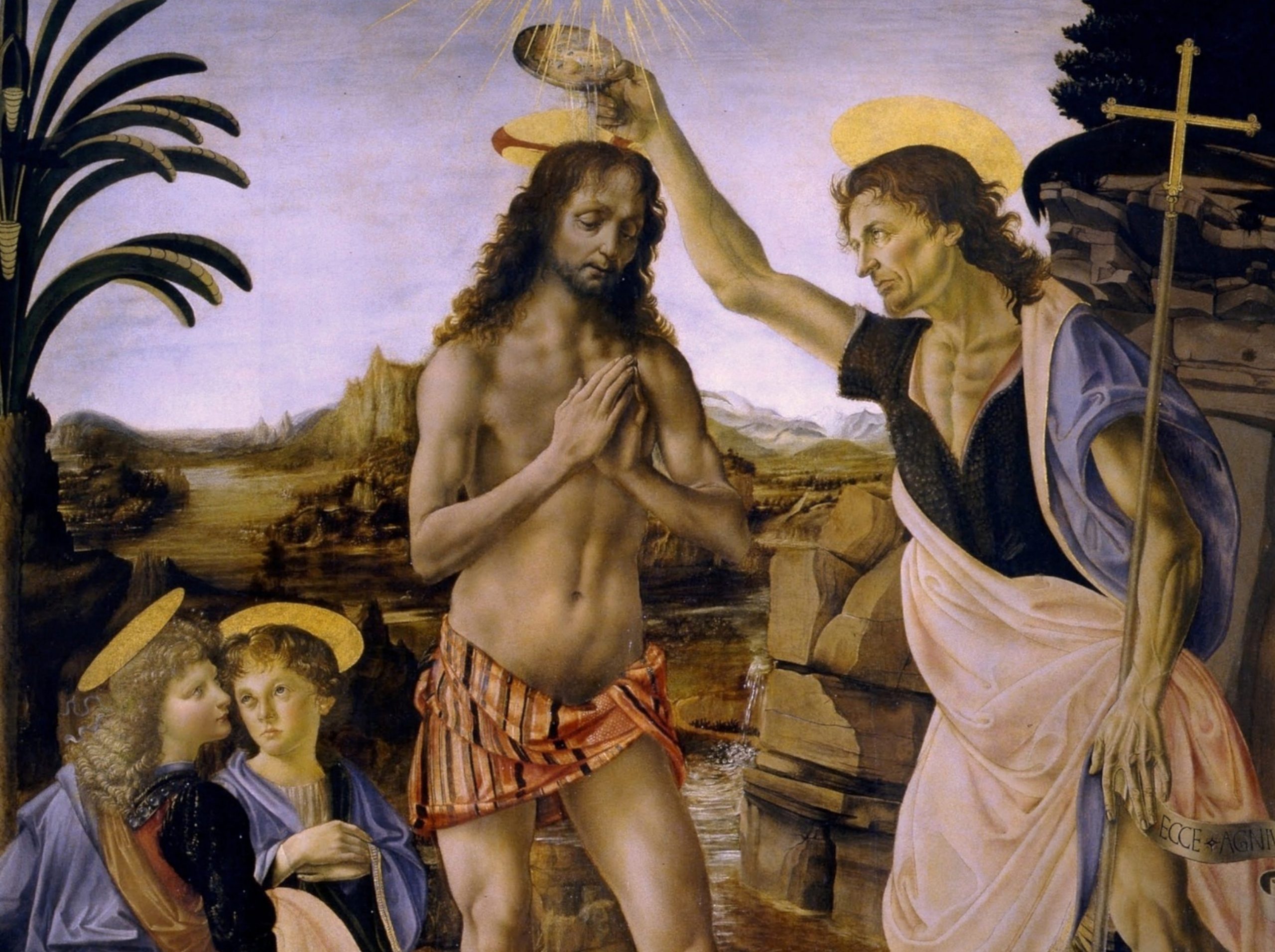 Posted at 20:41h in Sermons by Br Jonathan

A few days ago, some of us were discussing the appropriate date to celebrate the incarnation of Christ: was it in fact Christmas? Shouldn’t all the big feasting be on the 25th March, the Annunciation? But then, when exactly does God actually become flesh? With the angel’s words to Mary? With her assent to God’s plan? A week or two after this? When she first felt the baby move? Etcetera – you get the idea. I suppose another way of framing this question is, when does something begin? Over the past couple of weeks, we’ve seen a variety of ‘beginnings’ in Jesus’ life: his birth, his circumcision and naming, the arrival of the Magi revealing him as King and God, and foretelling his death, and then today, we remember Jesus’ baptism.

It’s impossible to grasp the fullness of what God has done in becoming human, but each of these events offers us a window through which we can glimpse something of the mystery of God made flesh: what then might this account of Jesus’ baptism be telling us?

I say this account, because the Gospel writers all differ slightly in their details: one of the interesting examples of this is the way that Luke implies that Jesus’ baptism was the final one carried out by John: “Now when all the people were baptized, and when Jesus also had been baptized…”. There’s something about that phrasing that suggests finished, and it’s also notable that in the verses we skipped over today, Luke tells of John being imprisoned by Herod, i.e. he’s off the scene. Jesus’ baptism then not only marks the completion of John’s work, but also its transformation. Jesus receives the ‘old’ baptism, of water, and then makes possible the ‘new’ baptism, with the Holy Spirit and with fire.

One of the ways in which this baptism is ‘new’ is its radical inclusion of all peoples. Luke twice mentions that many others, “the people”, “all the people” are present, and immediately following this passage comes Luke’s account of Jesus’ genealogy, which concludes, “son of Seth, son of Adam, son of God”. So we see both a continuity and a newness: Luke says at the beginning of his genealogy that Jesus was “the son (as was thought) of Joseph”, thus inserting him into a human lineage while at the same time underscoring his divine nature: he is not the son of God by “natural” means, but by supernatural means. He is part of our human family, yet in his baptism he draws all people into a new family, one in which we can all become children of God and fellow heirs with Christ.

Later on in Luke’s gospel, we see another extension of the significance of Jesus’ baptism, when he says, ‘I have a baptism with which to be baptised, and how constrained I am until it is accomplished’. This further adds to what we have already seen, that what happened at the river Jordan between Jesus and his cousin John was a deeper realisation of the purposes of God and as such a step along a journey, rather than an isolated event, just as our own baptism is not the entirety of our Christian discipleship, but rather a sign of the direction our life will take. At the end of today’s gospel reading, Jesus has a baptism both behind him and before him, and the baptism that lies before him is ultimately the cross. Jesus’ baptism in the Jordan, the vocation he accepted at the Jordan by identifying himself with the human race in our sinfulness, was then his first ‘yes’ to the cross, the first of many. Just as Jesus was immersed in the waters of the Jordan, so he will be immersed in his passion, plunged into it until he became one with it, and it with him, and all things are made new.

And here, then, is the invitation for us, to go on being drawn deeper into the things of God. Each day holds out the opportunity for us to re-immerse ourselves in God, to discover again his love and his grace and all the potential that life in him brings. As we allow God to re-soak us, re-dye us, re-create us, we become, step by sometimes painful step, all that he made us to be.

D.H. Lawrence writes about this beautifully in his poem ‘Shadows’, which I would commend to you, particularly if things are hard going at the moment. I’d like to end by sharing the beginning and the end of it:

“And if tonight my soul may find her peace
in sleep, and sink in good oblivion,
and in the morning wake like a new-opened flower
then I have been dipped again in God, and new-created.

And if, in the changing phases of man’s life
I fall in sickness and in misery
my wrists seem broken and my heart seems dead
and strength is gone, and my life
is only the leavings of a life:

and still, among it all, snatches of lovely oblivion, and snatches of renewal
odd, wintry flowers upon the withered stem, yet new, strange flowers
such as my life has not brought forth before, new blossoms of me,
then I must know that still
I am in the hands of the unknown God,
he is breaking me down to his own oblivion
to send me forth on a new morning, a new man.

I pray that we may all know what it is to be “[d]ipped again in God and new-created”. Amen.