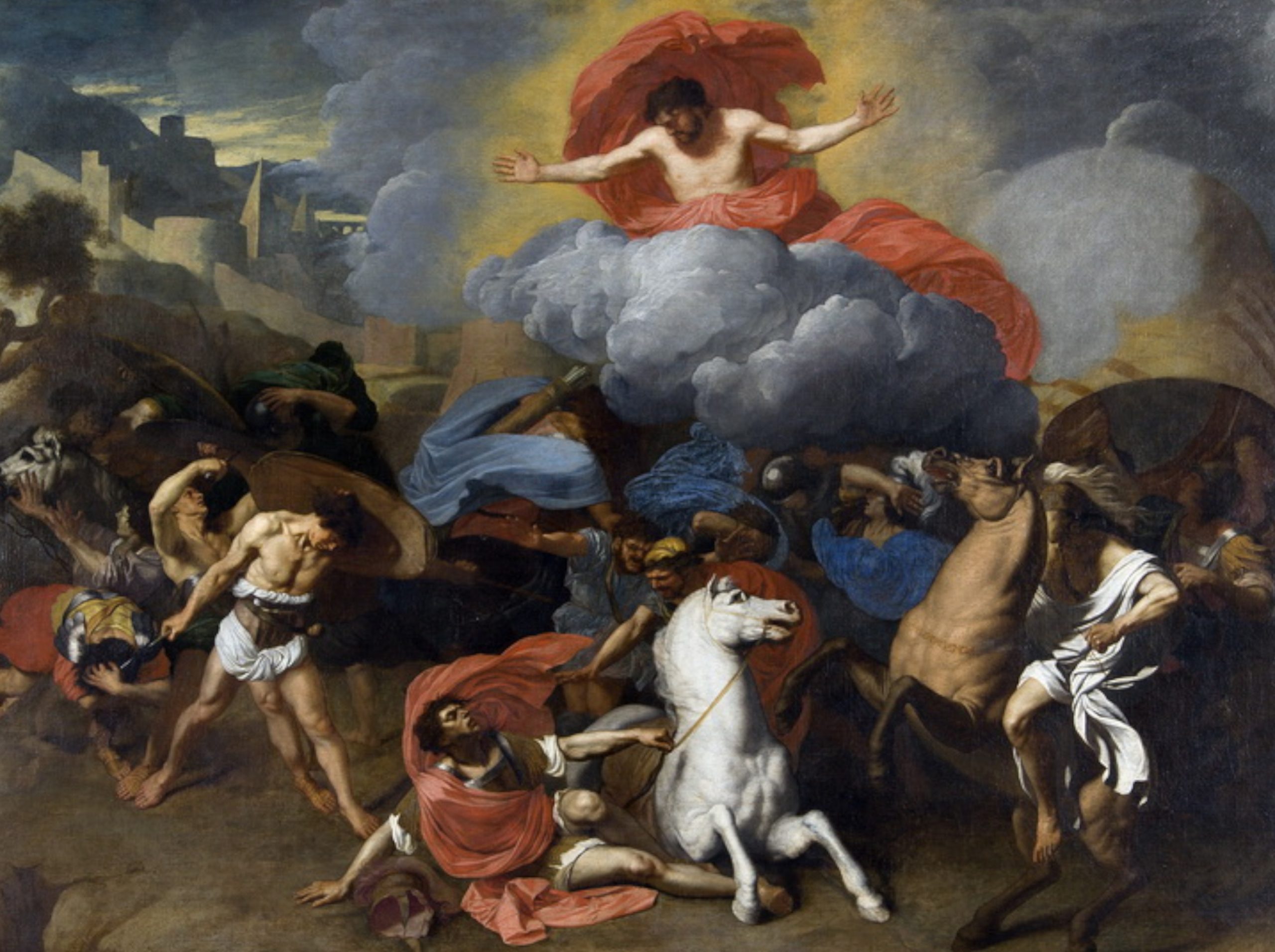 Posted at 13:21h in Sermons by Br Jonathan

As a teenager, one of the more mortifying routines I had to endure – at that time in life when everything is mortifying – was the weekly games lesson at school, when two team captains were invited to divide the class among them, one at a time. Whether it was rounders, rugby or football. I was invariably the last to be picked. If picked is the right word when the captain has no other choice.

As my PE report once famously put it: ‘Jonathan kicks the ball with difficulty, and receives it in much the same way’. I was given a D+. The + was because I was always, and I quote, ‘nicely turned out’. Less commendable was my ability, after an hour on a muddy rugby pitch, to remain nicely turned out.
In that situation, as in many others, we were chosen – or not – according to our merits. In today’s readings we are reminded that the kingdom of God operates – as ever – according to a different, perverse logic.

To explore this further, let’s take a look at Simon (as he was). The narrative in Luke is confusing, but the gospel passage we’ve just heard appears to be the first time Simon had encountered Jesus. And there is nothing here – as in Matthew, I think – to suggest that Simon was taking any interest in Jesus until Jesus took an interest in him.

He wasn’t among the eager crowds pressing in on Jesus to hear the Word of God. He was absorbed in washing his nets; that is, in the affairs – the desires and the anxieties – of everyday life. What have I netted, what can I net? What is my net worth? And even at this, we’re told, he wasn’t having much success.
Luke Jesus he was a marginal figure; an uneducated fisherman from Galilee of the Gentiles. Probably not very pious; possibly not very righteous.

And from what we can glean of his personality from the gospels, he was impulsive, volatile and inconstant; writing cheques with his convictions that his courage couldn’t cash. Generally un-rocklike. Yet it was to him that Jesus entrusted the keys to the kingdom of heaven.

Now as you know, every week the Church Times asks someone who they’d like to be locked in a church with, and my highly unoriginal choice would be Saul of Tarsus. Closely followed by Martin Luther, Miriam Margoyles and Timothy Chalamet. A man can dream…

In contrast to Simon, Saul had made a name for himself as a zealous upholder of God’s Law. As such, he was actively persecuting those who proclaimed Jesus of Nazareth as Messiah. Only, it’s worth noting he didn’t have the courage to throw the stones that killed Stephen. No, he looked after their coats.

So seemingly incredible was his conversion from Saul to Paul that it took some time for the churches to trust in it. And let’s just imagine for a moment that a terrorist with the blood of many people on his hands is released from prison, a freshly converted Christian, having had – so he says – a revelation from Jesus himself, and with a burning desire to test his vocation here at Mucknell.

How would we feel?…We’re Anglicans, so we’d be polite.

Anyway, as Paul the Apostle, Saul still cut an unimpressive figure, as he himself admitted: small, bow-legged, short-sighted, of indifferent health and a poor public speaker. Nor had his conversion led to a personality transplant. Now he obviously had many sterling qualities. But he was also proud, stubborn, highly-strung, touchy – if not irascible – and impatient. And unlike Peter he was too clever by half, writing convoluted letters that were hard to follow even without the interval of 2000 years.

I imagine he alienated a fair number of people. And yet it was he who found himself chosen as God’s ambassador to the gentiles. Why not some handsome, eloquent, well-born youth of the kind who surrounded Socrates? Someone who looks good on Instagram. Or one of those irenic arrangements with the kind of gentle smile and a soft voice that passes for holiness? Someone, in other words, who could command respect and attention.

In all of this, it’s tempting to think of Jesus as the coach in some cheesy American movie, who takes on a team of no-hopers and manages – with the help of some cliché-laden pep talks – to bring out the latent talent in each player, finally leading them to victory in the state championships. There are shades of this in the Rule of St Benedict. In his Prologue he writes: ‘What is not possible for us by nature, let us ask the Lord to supply by the help of his grace’. Here I must respectfully depart from my holy father. This views grace as a kind of top-up. But our plight is more comprehensive than I think even Benedict acknowledged.

When Peter says ‘Go away from me, for I am a sinful man’, he is not recalling particular lapses, however grave, or the accumulative weight of his peccadillos. It is a recognition of something much more profound.

This is made more explicit I think in the passage we heard from Isaiah, who encounters the Lord seated on a high and lofty throne, surrounded by angels shouting at each other amid clouds of incense.

Simon has the same equally shattering experience: it just takes place in a fishing boat full to the gunwales with carp and sardine. ‘I am a sinful man’ is not an ethical statement. It’s a religious or theological one; giving expression to the ontological gulf that separates us, mere mortals, from the living God.

Now sin, I know, is never a particularly popular subject, in or out of the pulpit. And the notion that humanity exists, as Calvin put it, in a state of “total depravity” – however we understand that – is likely to encounter considerable resistance in a world where even a media company like Bloomberg claims it was – and I quote – born with a mission to change the world for the better. I was alerted to this because the adverts on Spotify tell me every third song that with Bloomberg I can truly achieve my god-like potential. It belongs to a new species of bullshit known as ethical-whitewashing, but people buy into it.

On Holocaust Memorial Day Br Stuart read us an extract from a work by the late Jonathan Sacks, who remarked that from the Enlightenment onwards the Jewish people had been persuaded to put their trust, not in God, but in the goodness and progress of humanity. And yet it was at the heart of a rationalist, liberal Europe that the murder of 6 million Jews took place, the monstrous efficiency of which was a by-product of these human gains. Today, unaccountably, the world’s faith in itself remains undaunted.

In his letter to the Romans Paul reminded them that the very worst humanity can suffer is to be left to its own devices; to be without God in the world. The failure of Peter’s catch, contrasted with the huge haul he nets when he is with Jesus, may be a way of symbolising the futility of human efforts in this regard.

Even as an ardent Pharisee, Saul would underestimate – could not in fact see – the extent to which sin infects and corrupts all that we do, even our very best actions. In his hands he had managed to turn the Law – good and holy in itself – against the God who gave it. Later he would understand that the gulf that separates us from God cannot be fixed with piety or moral effort. That we have no latent talent for the things of God.

He came to this realisation, however, only in the light of God’s grace, made known to him – as to us – in Christ Jesus. In Christ God is fulfilling his covenant promises; doing what we, in our weakness, could never do for ourselves. As a result of which Christ has become our faithfulness, our salvation, our wisdom and our peace. To my mind, this is seriously good news.

When we acknowledge this, God’s recruitment policy makes greater sense. For not only does he choose us independently of our merits: he seems to actively headhunt the least promising human material. ‘God chose the foolish things of the world to shame the wise; God chose the weak things of the world to shame the strong. He chose the lowly and despised things of the world, the things that are not, so as to reduce to nothing the things that are, so that no one may boast’. And as he says elsewhere: we hold these treasures in earthen vessels, so we & others don’t confuse the surpassing power of God with our own.

And in the providence of God our weaknesses of character and yes, even our sins, can be turned to good account. Is the crucifixion not the most astonishing kind of alchemy, whereby the very worst humanity was capable of was made the means of our salvation.

However many spanners we throw in the works, however we might try and sabotage it, God will achieve his plan of salvation for the world. As Paul (or someone like him) wrote in his letter to Timothy: we were called with a holy calling, not according to our works, but according to his own purpose and grace, which was given us in Christ Jesus even before the world began.

Our first calling is to respond to that faithfulness with faith. It is the only thing that as Christians differentiates us from anyone else. As Karl Barth said of Paul: ‘Fashioned of the same stuff as all other men, a stone differing in no way from other stones, yet in his relation to God – and in this only – he is unique’.

We must never be tricked into selling ourselves, or some admixture of ourselves and God – a occupational hazard for those of us in dog-collars and habits. We are ambassadors, emissaries, bearers of a message, sent – as it were – from the future, on behalf of someone else. People of unclean lips, certainly, but – and this is the crux of the matter – forgiven; freed from the prison of this world in order to proclaim the dawn of the age to come.

From a human point of view this can seem unimpressive and unsatisfying. Paul brought no ascetic disciplines, techniques or esoteric knowledge with him to Corinth, that they might find grounds on which to flatter themselves. Only this message: ‘Christ died for our sins…and on the third day was raised to life’. And yet through it, they – and we – are saved.

It is the message of the inexorable triumph of God’s grace.