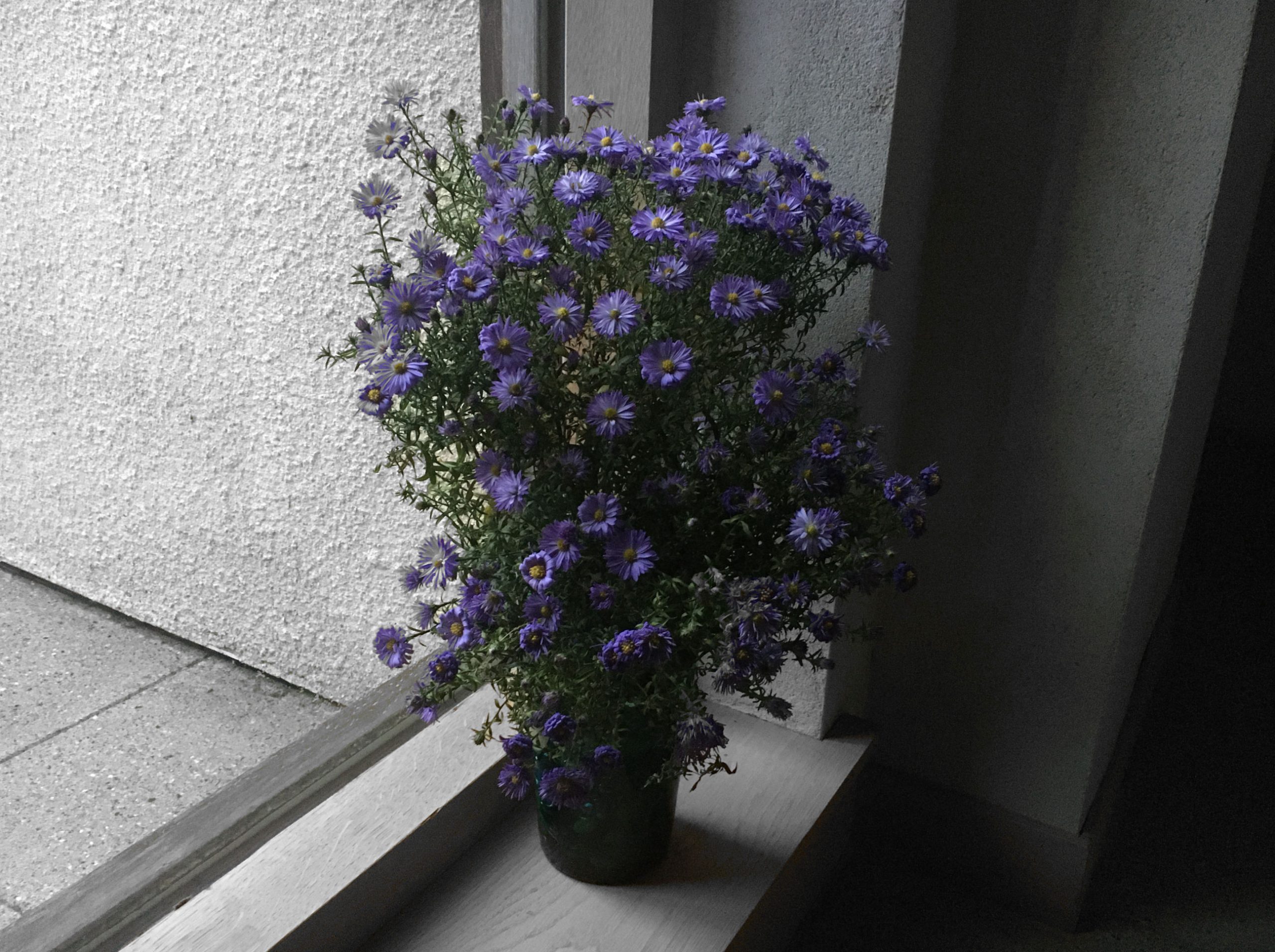 Posted at 14:47h in News, The Community by Br Jonathan

Friday 4th – This piece of news strictly belongs in last month’s mlog (monastic blog), but I didn’t want it to get missed. On the 25 August Bishop Anne Hollinghurst of Aston became our new Bishop Visitor. Bishop John of Worcester, whose term as Visitor has come to an end, has been our Visitor for the last ten years. The Visitor’s job is to provide oversight and support and make sure we don’t go way off-piste. I think I’m right in saying none of us has yet met Bishop Anne, but we look forward to a socially-distanced visit (lowercase v) sometime soon.

On 1st September we welcomed Sam Riley as our latest Alongsider. Sam, who has become a familiar face at Mucknell over the last few years, has taken the opportunity of a year-long sabbatical from his post with the Forestry Commission in Oxfordshire. We are now almost at capacity, with only one spare cell left. So if you’re thinking about exploring a monastic vocation don’t put it off any longer. As they say at Aldi: when it’s gone, it’s gone!

Saturday 12th – Last night we prayed our farewells to Sam, who on reflection decided that now was not the right time to test his vocation. Fortunately he has been able to resume his life without too much disruption. We wish him well as he continues his discernment and look forward to seeing him again when the guestwing re-opens.

Br Stuart and I were on kitchen detail this week and over the potato-peeling he told me that his first Aspirancy (as they called it then), aged twenty-eight, lasted only two weeks.

“I realised I had a lot of growing up to do”

“And to think you later became Superior for twenty years”

[with mock outrage] “Excuse me, it was twenty one years”

“Over the course of 5 afternoons, a group of novices met via Zoom for a study week / conference with a difference! Usually we’d gather in person 3 times a year for study, fellowship and prayer. We were able to meet in Gerrard’s Cross in February, hosted by the Sisters of the Church, but haven’t been able to meet physically for either our June or September conferences. Sr Alison therefore organised a week for us to take it in turns to share a book that has been significant to us in our journeys so far. Over the week, 10 of us took part in often lively discussions, with 8 people all together sharing a wide variety of texts that have helped and inspired them. Discussion flowed naturally out of these texts, and covered such areas as prayer, both individual and corporate, the work of the Holy Spirit, poverty, the environment, celibacy, Christian unity, contemplation, stability, different ways of living our own and our communities’ charisms, and much more besides. It was also a great time to catch up with some familiar faces and meet some new people.

Most of us found the Zoom experience quite tiring, and it was definitely not an ideal way for new novices to suddenly meet a whole bunch of new people, but overall the week has been immensely rewarding, and I think has given everyone at least one or two new reading ideas!”

Sr Sally has begun a two week period of self-isolation in the hermitage ahead of a hospital operation. She is managing to keep the Devil at bay with that most monastic of spiritual weapons: handicraft. These two baskets recently appeared in the East Link (or “Leper’s Link” as I’m calling it), proof – along with the return of empty lunch plates – that all must be well:

A doe and her fawn have taken up residence in the Hazel copse near to the entrance of the estate. I see them now almost every evening. They’re a bit wary, the young one especially, but unlike many others they don’t bound away at the first sight or sound of a human. The other day I more or less ran into them and they did nothing more than momentarily look up from their grazing (“destroying the trees” Br Adrian calls it). I kicked myself for once again forgetting to bring a camera. However I must have been feeling unusually energetic, because I decided to run (then jog, then walk, then sort of lunge breathlessly) back to the building to get one, confident in the hope that they would stay put and submit nonchalantly to a photoshoot.

Well, they did and they didn’t. Deer are like people: it’s okay if you stumble upon them naturally, but they get suspicious if you start stalking them with a camera. I did get very close at one point and then a rabbit shot out from the undergrowth and startled us all (yes, there was literally a rabbit off). Anyway, I managed to get you this. I hope you enjoy it.

Postscript: It turns out that ‘there’s a rabbit off’ is a Geordie expression. Even now, at the age of thirty six, I’m still discovering words and phrases which I assume are standard English but turn out to be peculiar to the North East. I remember not that long ago getting exasperated with someone who didn’t understand what I meant by ‘he gave me wrong’ (he told me off). When ‘there’s a rabbit off’ it means something’s wrong, or something’s up. Perhaps the preceeding paragraph makes more sense now.

Tuesday 22nd – On Sunday we celebrated Br Stuart’s Golden Jubilee of Priestly Ordination. A special liturgy was prepared for the Eucharist, which included a piece by Hildegard of Bingen sung by Sr Gregory and a renewal of commitment to ministry. Br Stuart also gave a short homily in which he talked about how his understanding of ministry had changed over the years. Having once seen himself as part of an elite clerical caste, he now understands an important aspect of his vocation to be an enabler of the royal priesthood of all believers.

Br Michaël spent many hours in the kitchen creating a Gateau Saint-Honoré for lunch, which disappeared very quickly, and an anonymous benefactor sent Br Stuart two bottles of champagne, which went the same way.

Sunday 27th – Last week we had the oratory and courtyard sandblasted & steam cleaned, and what a difference it has made. It took a while to adjust to the brightness of the paving stones. I thought I was being very clever and pious when I compared it to the snow on Zalmon (‘When the Almighty scattered kings it was like snow falling on Zalmon’ – Psalm 68:14, Mucknell use). It turns out I haven’t been paying close enough attention, because of course the colour of the snow doesn’t come into it. It’s the insubstantial quality of snow, easily blown about by the wind in all directions, that the psalmist uses as a metaphor for the Lord’s victory over his enemies. This is brought out much more clearly in the New Living Translation: ‘The Almighty scattered the enemy kings like a blowing snowstorm on Mount Zalmon’. A similar image is used in Psalm 1, where the evil are compared to ‘straw blown by the wind’. Although by worldly standards a life lived by faith in God can appear very insecure, while life lived in the embrace of earthly powers and principalities gives a sense of permanence and impregnability – immortality even – it’s a reminder that the opposite is true.

Anyway the point of all this is that the courtyard looks beautiful and, having been cleaned at 150C, is totally Covid-secure. You could eat off it.

I’m afraid one casualty of the facelift has been the “Japanese Zen garden” next to the Oratory. In truth this was never more than a creative way of covering up imperfections in the surface of the pebble dash. But in moving the flagstones, which once formed the floor of the farmhouse kitchen and were probably made on-site using locally abundant supplies of clay, they more or less fell to pieces. Sr Alison was quick to claim them as ballast for some kind of bench-cum-shrine arrangement that is being planned for the kitchen garden.

Sr Sally has had her operation and is now recuperating in her cell. She is being ministered to by a very stern Assistant Infirmarian, who enjoys telling her off (or giving her wrong).

Tuesday 29th – Happy Feast of St Michael and All Angels, or as one medieval text puts it: the ‘high-angel’s tide in harvest’. I don’t think I’m alone in preferring this feast to almost all others. A large part of its sweetness lies in the seasonal change it marks., when ‘Michaelmas gales assail the waning year’ (Guite). Then there’s the perennial appeal of angels. In both scripture and tradition angels are a sort of anthropomorphism of God’s presence. Over time this seems to have served two contradictory purposes, safeguarding God’s remoteness on the one hand, and seeking to overcome it on the other.

A poll carried out in 2016 suggested that one third of Britons believe they have a guardian angel. And why not? This kind of one-to-one supervision must be much more comprehensible and comforting than the rather more abstract assertion that ‘God loves you’. He may well do, but I can’t help imagining that I’m competing for His attention with 7.5 billion others. And if an angel has no other job than to watch over me, not only I am assured of its single-minded attention, but I must assume that it is unambiguously on my side. God, by contrast, might seem strictly disinterested, established in irreproachable majesty and bound – despite himself – by the natural law of justice. No matter how warmly and convincingly the gospel of grace is preached, Gehenna is always smouldering in the background.

It may come as no surprise that St Benedict, who had a lively belief in the fires of hell, did not share in any sentimental angelology. On the contrary. In Chapter VII of the Rule, Concerning Humility, Benedict warns his monks that their actions are being reported ‘throughout the day and night, by angels assigned to us…’ [Carolinne White trans.]. Abbot Thomas, in a recent comment on this chapter, compared Benedict’s angels to a celestial KGB. ‘Not’, he said, ‘a very encouraging image’. One way of “rescuing” these texts is to demythologise them, and Abbot Thomas went on to compare the unceasing scrutiny of the angels with the practice of mindfulness or recollection. As for hell, we know by our own experience what happens when we get carried away by ‘the passions’ – anger, pride, lust etc. -, which even in this life can be the cause of much gnashing of teeth.