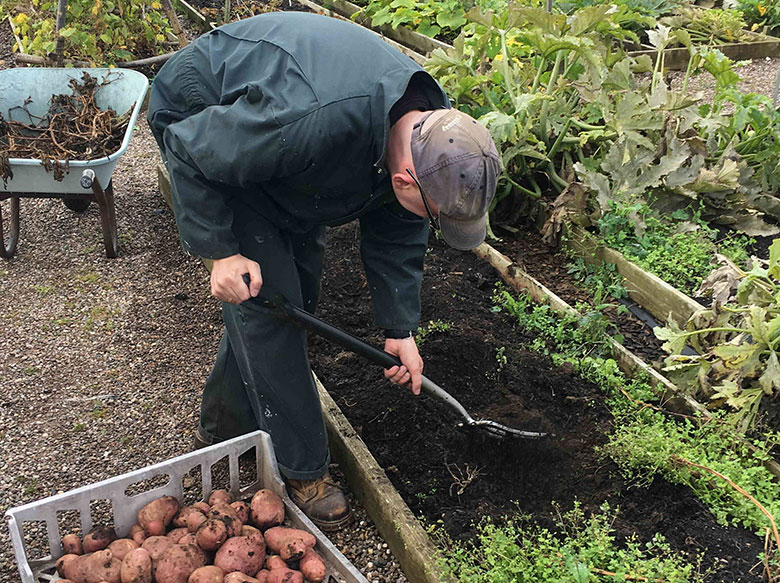 Posted at 10:24h in News, The Community by Br Jonathan

Tuesday 3rd, Feast of St Gregory the Great – At a short ceremony during the Eucharist Br Patrick renewed his Simple Vows for another year.

Thursday 5th – Katy Hirst, a former member of the Community of St Anselm (COSA) who spent her monastic placement with us last year, and whose vocation story can be read here, left us after a few days’ retreat. She has just finished her second year at COSA and is now looking forward to starting her ordination training at Ridley Hall, Cambridge.

Friday 6th – Some of Br Michaël’s icons are now available in our shop as postcards. He tells me that his waiting list for commissions is now just over 2 years, with prices ranging from £300 to £4000. After a summer break he is looking forward to once again taking up his icon course in Canterbury next month.

Br Anthony has been harvesting apples and pears from our orchard. We’re currently eating Banns and Worcester Pearmain, which unlike the varieties we get the supermarket actually taste of something.

Sunday 8th – A car load of us went to Tintern Abbey, in the beautiful Wye Valley, for the annual ecumenical Vespers organised by the Friends of Tintern Abbey. As well as our Roman Catholic brothers from Belmont Abbey (and many thanks to Abbot Paul for the photographs), we were joined by sisters from Ty Mawr, the Holywell Community and Brs Martin John and Tobias from Glasshampton. Blue skies and the addition of Newport Cathedral choir made it a very different affair from the one held two years ago, when we last attended.

Monday 9th – Our new Alongsider, Lydia, arrived from the United States. That’s about as much as I can tell you at the moment because Sr Sally and I had left for Hertfordshire before she arrived. We were attending the third Anglican Religious Communities in England conference, which over the last four years has brought together traditional and new communities into some very fruitful dialogue. The theme this year was ‘Differences in Common’.

The keynote speakers were Sister Dr Gemma Symonds CJ (not, as I accidentally called her – to my shame – Carrie Symonds), director of the Religious Life Institute, and the historian Dr Peta Dunstan. Sr Gemma challenged us to think about our charisms, while Peta drew on her extensive knowledge of the history of Anglican Religious life to contextualise the still-live issue of vows and leadership. There was also a chance for members from four different communities to share their stories, myself included. We were also introduced to the new Canon on Religious Life, and a new document produced by the Advisory Council on the terminology used in religious communities, both of which were more interesting than they sound. There were also several workshops running in the afternoon, and more than enough opportunities for people from different communities to get to know one another, which is really what it’s all about.

Everyone seemed to agree that this year was characterised by a much greater sense of unity, and at the next conference in 2021 we will begin to discuss what, as communities both old, new and emerging, we might do together.

Sr Sally was on the organising committee for the conference, and ended up becoming our unofficial sacristan. The chapel, which I think had been built by Quakers, wasn’t set up with an Anglican liturgy in mind, so after our first Eucharist we resorted to washing the patten and chalices in the loo, piling everything precariously on a nappy bin.

Tuesday 17th, Feast of St Hildegard – Today the church celebrates the life of St Hildegard of Bingen (d.1179), the Benedictine abbess who is remembered, among other things, as a mystical theologian and musician. For obvious reasons I have also been thinking about one of our former sisters, Erica Whiteley, who took the name Hildegarde when she made her Solemn Vows.

Erica was born in Redditch in 1904, the eldest child of Frederic and Margaret Whiteley. Her father was a solicitor and a prominent figure in the town’s civic life. Both sides of the family were active Wesleyans, taking a leading part in their communities. Her paternal grandfather became a preacher while still in his teens; a ministry he exercised for twenty-five years while advancing his career in West Yorkshire’s worsted trade.

Erica was educated at Stoneycroft, a girls’ boarding school near Southport, and later at Bedford High School. From 1924 to 1927 she was a student at Reading University, but graduated BA (in Latin, English and Psychology) from the University of London in 1929.

In 1928 she was confirmed into the Anglican Church at St Martin-in-the-Fields, London. Her brother Alec also became an Anglican and was later ordained. In the same year she took up a post teaching mathematics and Latin at St Helen’s School, Abingdon, which had been founded by the Wantage Sisterhood (CSMV). Here she also took on responsibility for a group of Girl Guides connected to the local Poor Law school.

In 1930 she moved to Kingston, Jamaica, where she taught Latin at Wolmer’s, one of the oldest schools in the Caribbean. Although she had intended to stay longer, ill-health forced her to return to Britain in 1934. For the next few years she held a number of short-term teaching appointments – at Hayward’s Heath, Hendon, Stroud and Plymouth – teaching either Latin, mathematics or both.

Her career in teaching came to an end just before the outbreak of the Second World War. Sr Mary Bernard remembered her as a very sensitive, bookish woman who ‘didn’t find life easy’, and so she may have decided – like Sr Mary Bernard herself – that the classroom was not her natural environment.

An exact chronology for her life during the war years is hard to establish. In 1939 she is said to have been working for the Milk Marketing Board, then a reserved occuption. But we also know from biographical notes taken by the Mother Superior of SSMV that from 1938 to 1940 she was providing Remedial Coaching at the Tavistock Clinic. This was one of the first out-patient clinics to offer systematic psychotherapy, and its children’s clinic was opened in 1920. Erica was probably involved in child guidance, and it must have been around this time that she received her qualifications in Vocational and Child Guidance from the National Institutes of Industrial and Medical Psychology.

She combined this with (?voluntary) work at the Charity Organisation Society (COS). Founded in 1869 in an effort to promote a more systematic & scientific approach to philanthropy, it emphasised the importance of self-help and self-sufficiency in the relief of poverty. Her involvement, which lasted until 1943, centred on the London boroughs of Hackney, Camberwell and Kensington. Although the exact nature of her duties is unclear, it was probably in connection with this that she organised training courses for nursery nurses responsible for ‘waifs and strays’. Again, whether in a voluntary capacity or not, some of the war years were also spent as Assistant Secretary to the London Diocesan Board of Women’s Work.

At some point she had acquired the first part of a University of London diploma in Theology, and from 1943-44 worked as a part-time tutor in Theology – the notes do not say where. This appears to have been completed in 1947. By this time she was a novice in SSMV and living with the community at Cuddesdon Palace. Sr Vivienne, later a Sister of the Community of the Holy Name, was then the only girl at St Helen’s, Abingdon studying Divinity at A Level, and Sr Erica (as she was then known) was given the responsibility of tutoring her.

Erica had arrived as an aspirant in November 1944, was admitted as a postulant in December, and clothed as a novice in June 1945 as Sr Erica Mary of the Paraclete. One of the few things recorded by the community’s log book during these years is her on-going struggle with what appears to be back pain, for which she sought treatment on a number of occasions. There are also several references to her borrowing books from the County Library. Together with Sr Monica Jane, a former librarian at Cheltenham College, she could count herself among the more academically-minded members of the Community. After moving to Burford she carried out some thorough research into the history of the Carey family, the Priory’s former owners, Unfortunately another historian published a book on the subject before she had time to do anything with it.

When from 1949 onwards the Community began to assume a Benedictine identity, a move which entailed singing both the Offices and Mass in Latin, her knowledge of the subject came into its own. Her mathematical skills were also put to good use as the community’s bursar. As time goes on I will hopefully be able to uncover more information, not only about her earier life, but also her time in community.

She died at the Clewer infirmary in 1978.

That’s probably more than I intended to say on that subject, but there we are. Eventually, and hopefully before I myself die, I will have written a proper necrology (like this!) for the community to use.

In (sort of) related news, Sr Alison and Sr Jessica are in Oxford this week on an internovitiate study week being led by Dr Peta Dunstan (see above). By common agreement this is the best study week in the cycle. If anyone is going to give an introduction to the history of Religious life in the Church of England then it’s Peta, and to make it even more engaging she takes novices on the road. There is a walking tour of Oxford, visiting sites like the house on St John Street (scroll down on linked page) where Marian Hughes became the first woman since the Reformation to take vows in the CofE, as well as visits to Nashdom, Burnham Abbey and Ascot Priory.

Saturday 21st – Yesterday Br Michaël returned from the Lake District, where he was taking part in an “outdoor adventure holiday” (as they phrase it on their website) organised by the Calvert Trust and the Robert Jones and Agnes Hunt Orthopaedic Hospital in Oswestry. The planned activities included absailing, cycling and mountain scaling (see pictures below), and he became only the second person so far to have wheeled up Latrigg unaided. I think it caused the Abbot some sleepless nights, but he returned pretty much intact!