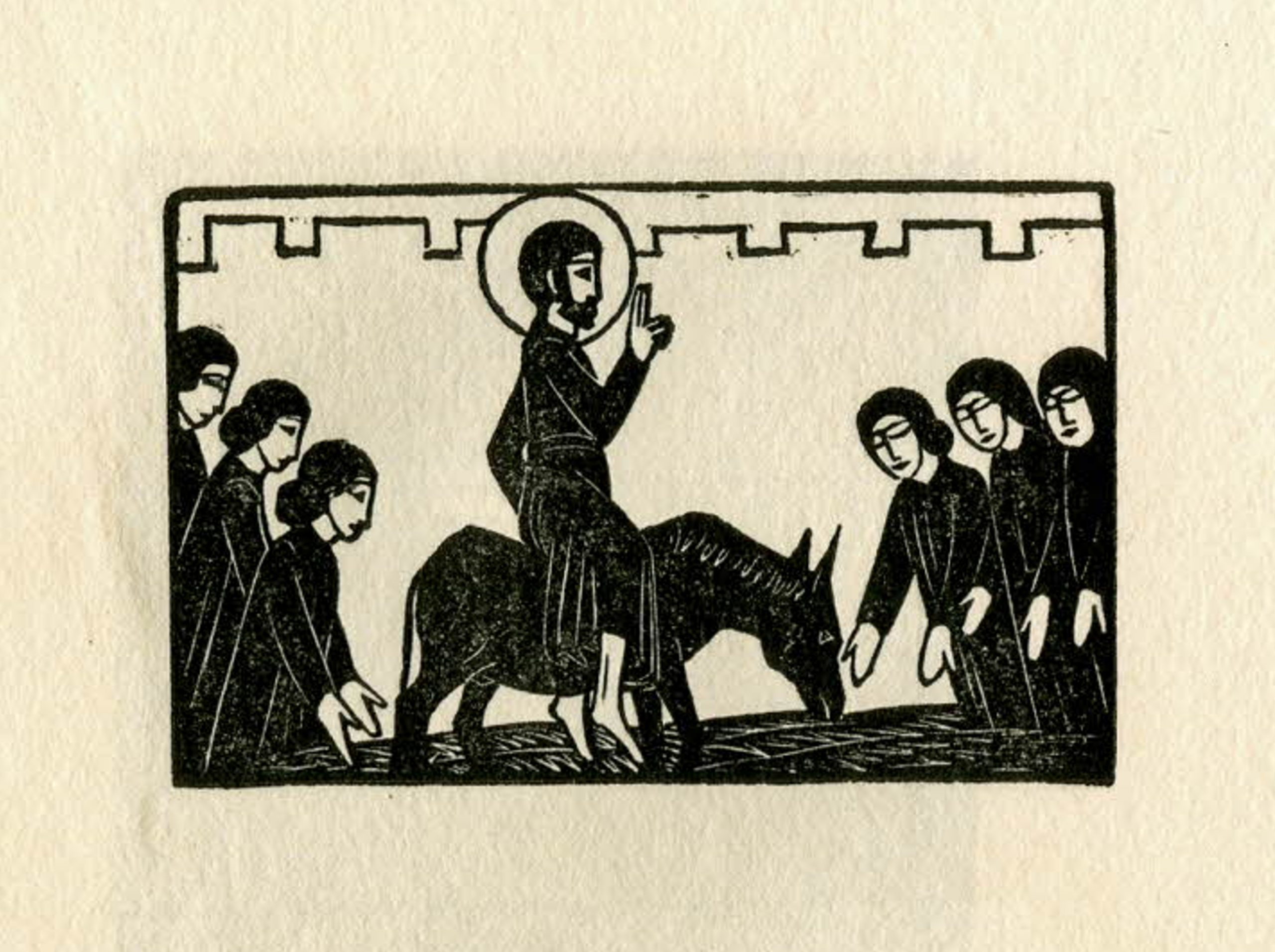 Posted at 07:35h in Poetry, Prayer and Meditations by Br Jonathan

An extract from a homily by St Gregory Palamas on Palm Sunday, read at Office of Readings.

After the raising of Lazarus on the fourth day, the Lord found an ass, and, when His disciples had made it ready, as the evangelist Matthew tells us (Mt. 21:1-11), He sat upon it and entered Jerusalem, as had been foretold in Zechariah’s prophecy: Do not fear, O daughter of Zion: behold thy king cometh unto thee: he is just and having salvation; lowly, and riding upon an ass, and upon a colt the foal of an ass (Zech. 9:9; Mt. 21:5). The prophet shows by these words that this king in the prophecy is the only true king of Zion. “Your king,” he says, “does not arouse fear in those who see him. Nor is he an oppressor or an evildoer accompanied by shield-bearers and spear men, trailing behind him a host of foot-soldiers and cavalry, passing his life in greed for gain, demanding taxes and tributes, and unpleasant and harmful labors and services. By contrast, His banner is humility, poverty and lowliness, and He enters mounted upon an ass, without any human pretensions at all. He is the only righteous King who righteously saves. He is meek, and meekness is His distinctive work.” The Lord said of Himself, Learn of me; for I am meek and lowly in heart (Mt. 11:29).

So the King who had raised Lazarus from the dead entered Jerusalem sitting upon an ass. Everyone, children, men, old people, immediately spread their garments in the way. They took palm-branches, which are symbols of victory, and went to meet Him as the life-giver and victor over death. They fell at His feet and escorted Him in procession, singing together, not just outside but also inside the precincts of the Temple, Hosanna to the Son of David, Hosanna in the highest (Mt. 21:9). “Hosanna” is a song of praise directed to God, which means, “Save us.” The additional words “in the highest” show that He is not only praised on earth, nor only by men, but also by the heavenly angels on high….

…In Christ Jesus there is neither male nor female, nor Greek, nor Jew, but all, according to the holy apostle, are one (Gal. 3:28). In the same way, in Him there is neither ruler nor subject, but by His grace we are all one in faith in Him, and belong to one body, His Church, whose head He is. By the grace of the all-holy Spirit we have all drunk of the one Spirit, and have all received on e baptism. We all have one hope and one God, who is above all, and through all, and in us all (Eph. 4:6). So let us love one another. Let us bear with one another, seeing that we are members one of another. As the Lord Himself said, the sign that we are His disciples is love. When He departed from this world, the fatherly inheritance He left us was love, and the last prayer He gave us when He ascended to His Father was about love for one another (Jn. 13:33-35).

A short reflection by Br Stuart, based on his reading of Marcus Borg.

It’s hard for us to imagine what it must have been like living under Roman domination for the Jews of Jesus’ time…and possibly because of this we tend to miss out on the ‘subversive’ element to much of Jesus’ teaching and actions.

Palm Sunday is a case in point. Why did Jesus ride into Jerusalem on the colt of a donkey, surrounded by a joyful crowd of his followers singing and waving palm branches? – something which Jesus had carefully prepared by arranging to borrow the donkey and, presumably, alerting his followers to gather at a certain time.

What many of us won’t have known is that at the same time as Jesus was entering the city from the Mount of Olives on the East, another procession would have been entering from the West – but a very different one. Coming from Caesarea Maritima, the city on the coast which was the centre of the Roman administration of Judea and Samaria, Pontius Pilate would have been leading an impressive procession of the imperial army of cavalry and foot soldiers to reinforce the Jerusalem garrison for the Feast of the Passover.

Contrast the symbols of imperial power and domination [weapons, helmets, poles topped by banners and golden eagles and the noise and thunder of the horses hooves and foot-soldiers marching in step] with the waving of branches and singing of a motley crowd surrounding a man on a young donkey – the symbols of peace and non-violence.

Try to imagine the reaction of the folk in Jerusalem to the glitter and pomp of the arrival of the Roman Governor and his army to subdue anything that might hint of Jewish rebellion: resentment, fear, awe, at such a powerful presence…and the contrast with the one of a young man on a donkey surrounded by a merry throng. I wonder how many would have realised its prophetic significance and how many dismissed it as embarrassing idiocy?

We might do well to ponder the prophetic significance for us of what has come to be called ‘The Triumphal Entry’. What does it tell us about the subversive, non-violent and just nature of God’s ‘kingdom’ in the face of today’s ‘powers’ where the wealthy are privileged and the poor (especially in the “developing” nations) have to struggle in order to survive?