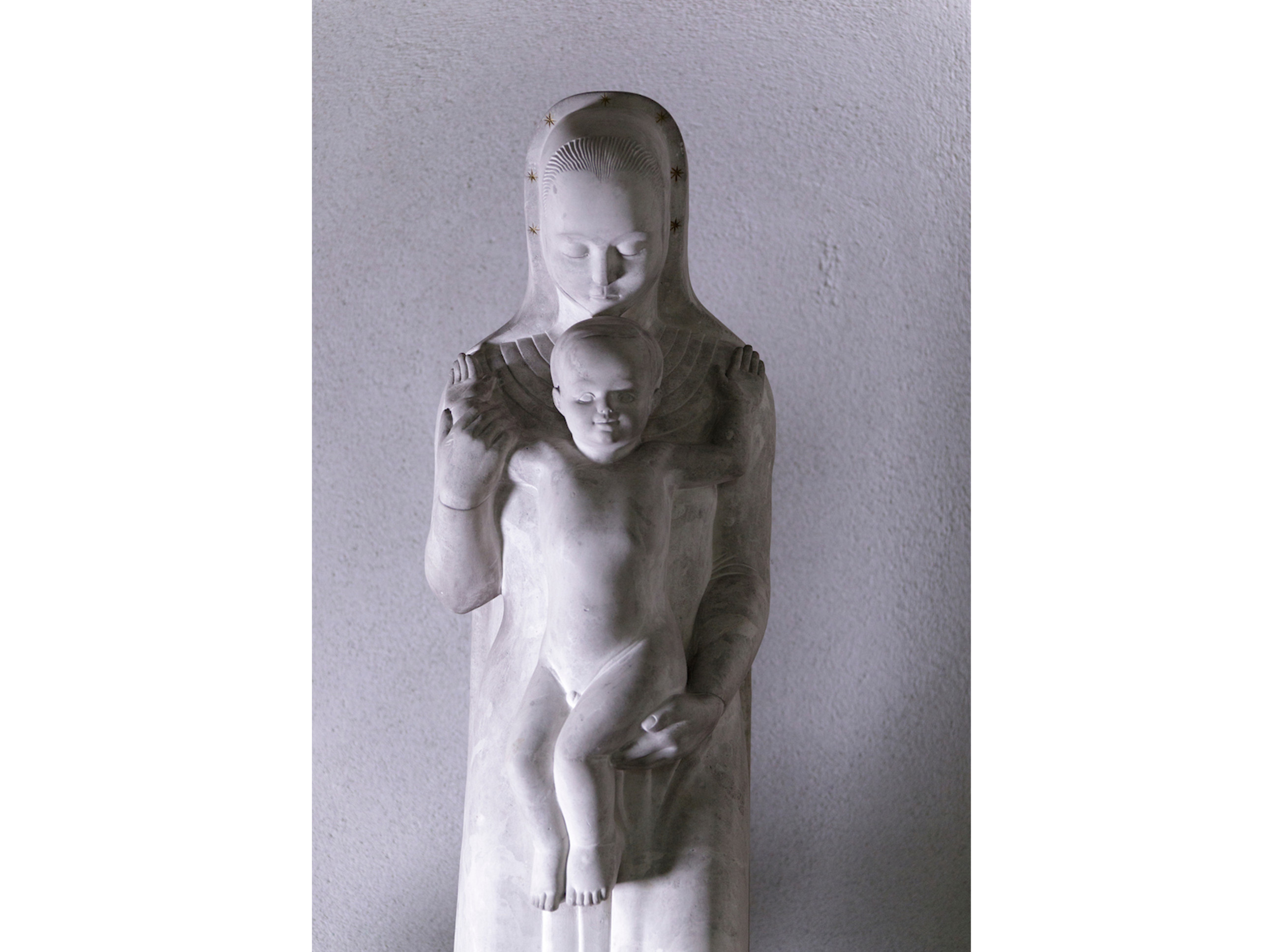 Posted at 10:40h in History by Br Jonathan

When I mentioned to Br Stuart that I was putting together a post on the statue we have in our narthex of Our Lady of Iraq, he told me that the former Superior of SSJE in Cambridge, Massachusetts, Martin L. Smith, had once based a sermon around it. I could find it in his Nativities and Passions: Words for Transformation (1995). Although he wasn’t sure if it would be of any use to me, it turned out to be a wonderful meditation that supplied my total lack of any valuable criticism. Reflecting back on a retreat he made one year at Burford, he writes:

‘This year one image of Mary and child has stayed with me and I want to tell you about it. It is a simple limestone statue in the chapel of Burford Priory in England, a small house of Anglican Benedictines. Mary is standing and is holding the baby in such a way that he is facing us with his arms spread out, the back of his wrists against her shoulders. She is looking down, down at the top of his head, down toward us kneeling below.

I prayed silently before this statue for a whole week before I caught on; all I knew in my tiredness was that I needed to be there. But a few days ago I got out the photograph of the statue that I had taken, and what must be obvious to anyone with any sense struck me instantly for the first time. Jesus, the naked baby leaning against the body of Mary, has adopted the form he will take when they nail him naked to the cross. Mary holds him there, as she is going to again when she stands beneath the cross uniting her own will with his own self-offering. If there is any image of the mother and child to stay with, this must be the one…

In some way I cannot describe or explain, Mary appears to be on the point of handing her baby over into our arms. Some images of Mary have her so wrapped up in her child that we are left simply looking on in wonderment at the mystery of motherhood. But in this statue she is the very image of open-handedness: “Here, would you like hold him?”…Of course, many of us do not know whether we would like to hold him or not. Ulrica, taken from Seton Lloyd’s memoirs, An Interval: a life in Near Eastern Archaeology

Lloyd – or “Hydie” as she was always known – was born in 1911 at Longworth House, which had been bought in 1909 by her grandfather, the lawyer, businessman and Liberal politician Sir Clarendon Hyde (1858-1934). Her mother Margery (1887-1947) was his only child and heiress to his considerable fortune. The family had been visitors to the nearby Convent at Wantage since their relocation from London, and in 1937 Margery became a founding member of their newly-revised Exterior Sisterhood. During her time as chatelaine – Ulrica’s father, Major J.K.L Fitzwilliams MC, had left her widowed in 1918 – Longworth became something of a hub for an extended network of women of faith. I shall explore this further in subsequent posts, although it is worth mentioning here that Ulrica continued her mother’s close friendship with the artist Bel Lithiby (1889-1966), a fellow Exterior Sister, one-time aspirant and friend of the community.

Against the wishes of her mother, but with her grandfather’s sympathy and financial support, she trained at London’s Royal College of Art and later in Paris. Although she had taken a diploma in design and would later produce illustrations for the novels of Somerset Maugham, PD Strong and Louis Golding (see below), her main focus was on sculpture. To this end she had apprenticed herself to a sculptor and stonemason. At the outbreak of the Second World War, in search of some adventure and keen to escape the stifling expectations of home and London Society, she volunteered with the Royal Army Service Corps. Initially sent to South Africa, much of her time was spent driving ambulances in Cairo and Alexandria. Joining a convoy to Baghdad in 1943, accompanied by two tame chameleons named Sodom and Gomorrah (she had an irrepressible love of animals), she sought out the archaeologist Seton Lloyd (1902-1996). They were married the following year. They had three children. Ulrica continued to work on her sculptures, which she once described as ‘medieval, straightforward and representational’, while teaching art in Baghdad and accompanying her husband on digs throughout Iraq and Turkey. When not working abroad they lived at Woolstone Lodge, near Uffington in Berkshire, which they had bought after her mother’s death and the sale of Longworth in 1947. It was from here that she worked with S.S.M.V on Our Lady of Iraq, and where she died ‘full of faith’ in 1987. Although she had been a faithful Anglican throughout her life, in the 1980s both she and her sister Petronella, who later joined the Christian Renewal Centre at Rostrevor, had experienced a renewed gift of the Spirit.

Our Lady of Iraq and other work

This statue of the Virgin and Child was commissioned by the community in 1949 at the cost of £60 (about £2000 at today’s value) at the time of their relocation to Burford Priory from the Bishop’s Palace in Cuddesdon. It was carved from white Mosul Limestone by the sculptor Ulrica Lloyd. Although there is no known catalogue of her work (but see below), her family have confirmed that she completed several designs for Virgin and Child statutes. A version very similar to Our Lady of Iraq was commissioned by St Stephen’s Church in Cheltenham and completed in 1955. From a letter and contract that has survived we know that S.S.M.V had arranged for a cast to be made of this design, with the aim of being able to make copies and benefit from reproduction rights. Lloyd had already promised one to a church in Austria before deciding, in consultation with a certain Mr Herring of Wantage, that the limestone was too porous and might be irreparably stained in the process. Assuming that Mother Rebe would be too busy to deal with the issue, she wrote to a friend of her mother’s, Sr Sybil Isolda, with the news that:

‘I have thought this over very carefully and feel sure that he [Herring] is right and that to risk the original purity for the sake of a cast would hardly be justified. For myself I have an odd kind of satisfaction that this means that you will have the Only copy of something which was done from start to finish with the idea of S.S.M.V as its root and shadow’ [4 July 1949]

From information taken from David Buckman’s A Dictionary of Artists in Britain since 1945, Vol 1 (2006), Michael Yelton’s Outposts of the Faith (2009), correspondence with Zoe Hyde-Thomson, as well as various websites, it has been possible to put together this provisional list of her work in churches throughout England:

Woolstone, a Stations of the Cross and seated Virgin; Slough, a St Michael; Wantage; Barnstaple; Axford, nr Salisbury, a St Michael; Compton Beauchamp, heraldic shield and ?relief of the Holy Trinity; Ashbury, an external statue of Our Lady. She also made a memorial to the writer Agatha Christie at Moulsford.