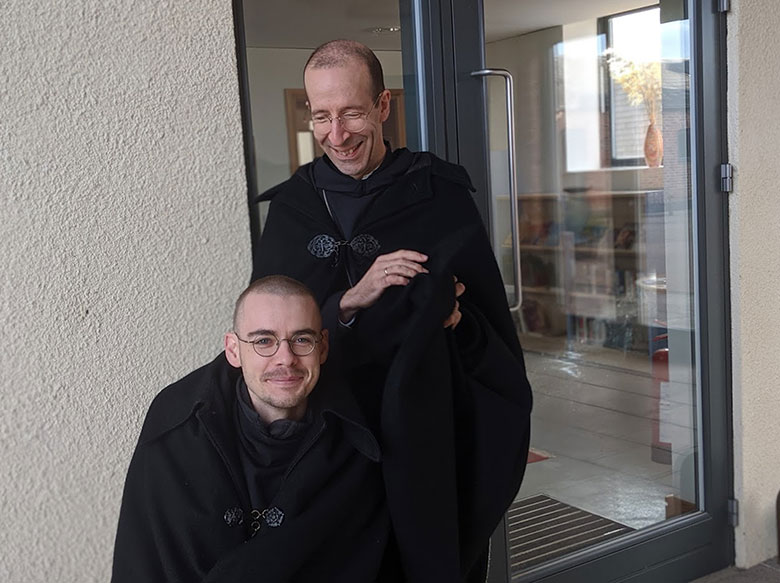 Posted at 13:48h in News, The Community by Br Jonathan

Welcome to October’s digest. As Br. Aidan is away for a couple of weeks, Sr. Jessica is looking after the news updates…hopefully without breaking the website entirely!

From Monday 30th Sep to Saturday 5th Oct, we had one of our two yearly Community Retreat weeks. On this occasion, we were very blessed to be led through the week by David Runcorn, who spoke to us from various Gospel stories involving boats and water, on the overall theme “Into the Deep”.

Prior to the Retreat Week, as mentioned at the end of last month’s digest, we had spent a week hosting the Anglican Religious Life twitter account. We weren’t really sure what to expect from the week, but had lined up a variety of topics around our life and work here, and it ended up being great fun. We had lots of positive interactions, both on and offline, including someone approaching Br. Stuart on a train to ask if he was from Mucknell, as they’d been following our tweets!

On Sunday 6th Br Michaël was once again on the road to Canterbury for his icon course, followed out of the door on Monday 7th by Abbot Thomas going to the annual meeting for leaders of Anglican Religious Communities, and Br Aidan heading north to Whitby and the Order of the Holy Paraclete for a meeting of brothers and sisters in first profession from different communities. We look forward to hearing all the news when they return!

Saturday 12th – Most of our wanderers have now returned, and it’s been good to hear news from the various communities present at the conference attended by Abbot Thomas. The leaders of the communities, as well as discussing various documents, heard from Fr. Richard Peers, who is currently Director of Education for Liverpool Diocese, and whose blog, Quodcumque, has all sorts of interesting articles.

We are also hosting the last of our themed retreat weekends this weekend, with Br. Patrick leading a group on a journey with William Law, an 18th Century non-juror, whose “personal integrity, as well as mystic and theological writing greatly influenced the evangelical movement of his day”. With session titles including ‘Mild Dottiness’, ‘The Abyss’ and ‘The Glassy Sea’, the community are as intrigued as our guests!

Tuesday 22nd – Many thanks to Sr Jessica for taking over while I was in The North. It was unusual to be away for almost two weeks, and this followed on almost immediately from our silent retreat. But I found the break very useful in my on-going discernment. The first five days were spent at the conference for junior professed members of Anglican Religious communities at St Hilda’s Priory in Whitby. Although numbers were reduced even on last year’s relatively poor showing, it was nevertheless very fruitful. I learned a lot from Sr Hannah Grace, the community’s guest mistress, about how we might go about hosting large groups if – ?when – we build a space big enough to put them in.

I must confess that my room at the convent had a TV. It has been a long time since I’ve had a chance to watch it, and I was mostly disappointed. There are so many cookery programmes. It’s become a national mania. At York train station I was sat next to two boys in their early teens who were discussing the best way to make a cheesecake!

After the conference I had a short holiday in and around Whitby, This was in the company of the priest, Shakespeare expert and long-standing friend of the community, Paul Edmondson, whose has written several posts for the website on his experience of living the Rule outside the monastery. Despite the rain we enjoyed some good walks along the coast and on the moors, and I paid my first visit to the former Benedictine abbey that towers over the town.

No sighting of any bats, wolves or gaunt Romanian gentlemen, but I was inspired to buy a copy of Dracula. I last read it when I was a teenager. I don’t think I appreciated then just how camp and melodramatic it is.

Wednesday 23rd – There was no melodrama at Br Adrian’s profession in Simple Vows yesterday, which was unusually calm and relaxed. Br Adrian made his profession in the presence of the Community, his family and friends, as well as our Franciscan brothers at Glasshampton. The readings were taken from Philippians 3:7-14 and John 12:24-26, and Sr Alison preached a very interesting sermon which you can read here. Charles Wesley would have earned quite a few royalties, had he still been alive, although we finished with the resounding words of ‘Guide me, O thou great Redeeemer’.

The sun was shining when we emerged, and we got plenty of photographs. These will be with you shortly!

A profession is always a very emotional experience – Br Stuart could never get through one without breaking down in tears! – and like a baptism it is a chance for us all to re-affirm our commitment, and to remind ourselves what we’re about.

Last Friday (!…sorry) Sr Alison attended “Symposium on the Religious Life: Discerning the Future (UK and Irish Catholic and Anglican women entering religious life since 2000)” at the University of Notre Dame in London. It was a chance to hear some of the trends and conclusions that emerged from research carried out last year by Dr Marian Calderon Munoz, Dr Gemma Simmonds CJ and others on….well….women entering religious life since 2000. Some of these conclusions are perhaps unsurprising: numbers are dwindling; communities with many elderly sisters sometimes find it difficult to bridge the cultural divide separating them from new members, and these starry-eyed recruits arrive with unrealistic expectations about what Religious life is all about.

On Sunday Br Stuart preached at Lady Margaret Hall in Oxford. This was by invitation of the Chaplain, the Reverend Andrew Foreshew-Cain.