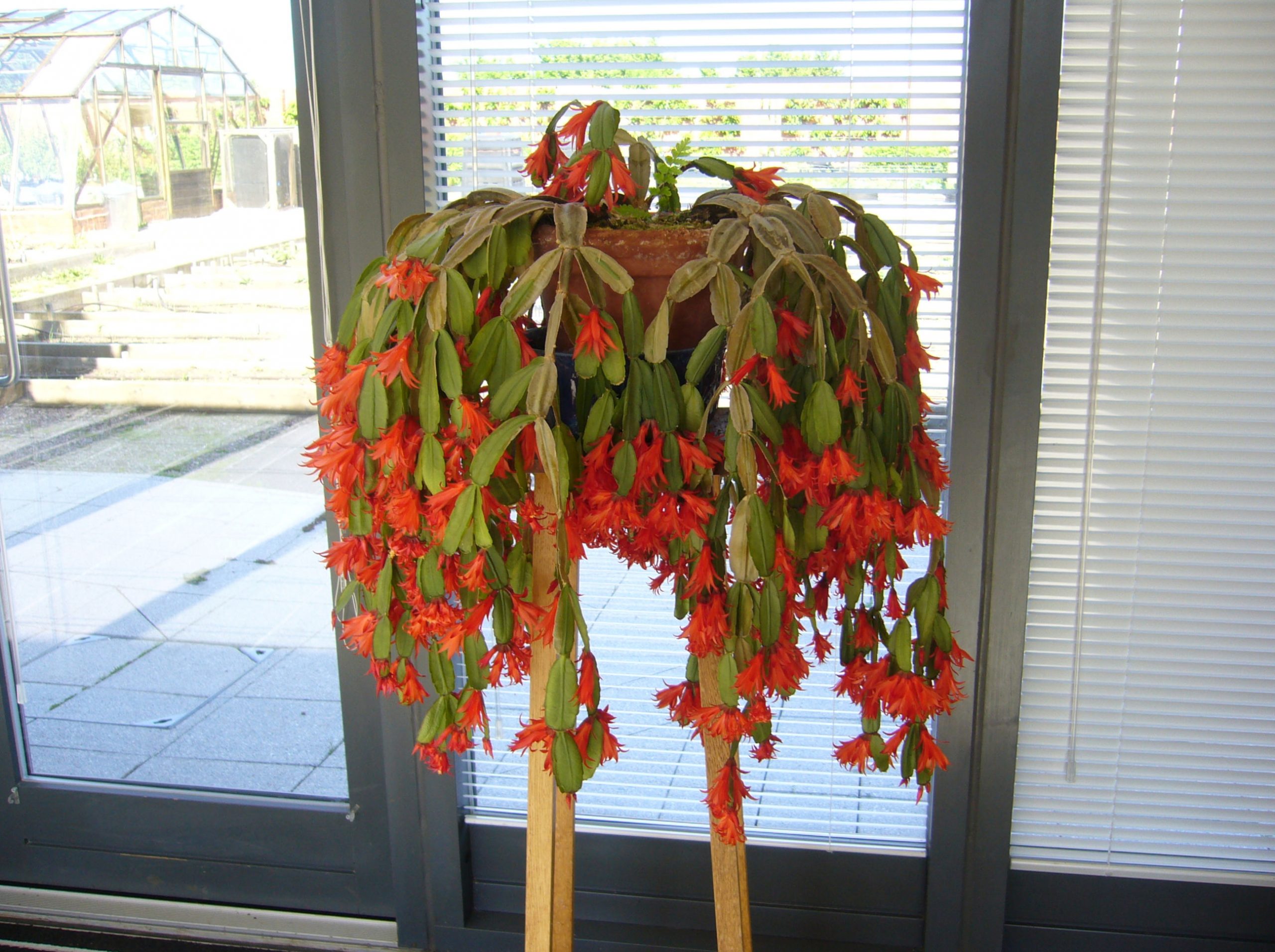 Above: Br Stuart’s Pentecost cactus, given to him in 1975

8th May – For the last few weeks Br Michael has been helping me turn my vision of a garden fence (they’re the only kind of visions I’m vouchsafed) into reality. Having to assist from a wheelchair has been a very frustrating experience for him; aside from anything else I’m an especially dull-witted pupil. But we’ve managed to get the first panels fixed on, and I now know the difference between a drill and an electric screw-driver. I’m just glad no one was around to see us at work. At one point Br Michael was lying face-up on a pile of willow, his legs on his chest and his wheelchair in bits around him.

Several years ago we all watched a Health & Safety instruction video in which the narrator’s constant refrain was ‘Is this the right way, or is this the wrong way?’. This has now become a Community catchphrase; a rhetorical question we ask ourselves when we’re quite sure that what we’re doing is being done in the wrong way. After setting him upright we both agreed that our work space was probably setup in the wrong way.

Within an hour of this incident Br Adrian appeared, pale and bleeding from the nose. Encountering a particularly stubborn tuft he managed to fall headlong on to a hand-push lawnmower. He assured us that at the time of the accident he was mowing the right way. The poor man managed to bruise his face considerably. He seemed to look worse with every passing day. When the skin around his eyes turned a particularly angry vermillion, and still very much immersed in my reading of the Divine Comedy, I told him he reminded me of Dante’s description of Cerberus, the three-headed hound of Hell. He took it in good grace.

That very same morning, to complete a trilogy of mishaps, Br Stuart wrapped the tractor around a tree. No one said anything as we heaved and hoed to release it, but we doubt if he was doing it the right way.

In other news Br Stuart returned from his visit to Malling Abbey in Kent, where he had gone for work purposes. It was the first time he’s been away overnight since the pandemic began. All but three of us have now been vaccinated.

9th May – I love snails. I caught this one before Lauds making the most of the rain.

On a more elevated note, here is an extract from William Barclay’s commentary on today’s gospel (Jn 15:9-17) that was read at Office of Readings:

“Jesus called us to be his friends. He tells his men [sic] that he does not call them slaves any more; he calls them friends. Now that is a saying which would be even greater to those who heard it for the first time than it is to us. Doulos, the slave, the servant of God was no title of shame; it was a title of the highest honour. Moses was the doulos of God; so was Joshua; so was David. It is a title which Paul counted it an honour to use; and so did James. The greatest men in the past had been proud to be called the douloi, the slaves of God. And Jesus says: “I have something greater for you yet, you are no longer slaves; you are friends“. Christ offers us an intimacy with God which not even the greatest men knew before he came into the world.

Jesus called us to be his friends and the friends of God. That is a tremendous offer. It means that no longer do we need to gaze longingly at God from afar off; we are not like slaves who have no right whatever to enter into the presence of the master; we are not like a crowd whose only glimpse of the king is in the passing on some state occasion. Jesus gave us an intimacy with God, so that he is no longer a distant stranger, but our close friend”.

Sr Jessica also preached on the same text. You can read the sermon here.

11th May – And now back to snails. I am genuinely thrilled to discover – thanks to Sr Jessica – that my love of snails was shared, if not exceeded, by my medieval monastic counterparts. Be warned: there may be more on this.

“Br Stuart has had a ‘new experience’! He was invited to be one of two chaplains at the Diocese of London’s Stepney Area Clergy Conference at the High Leigh Conference Centre from 10 to 12 May. Because of the lockdown restrictions the conference was online rather than in person – which made the chaplains’ job not at all what he had expected. Rather than ‘loitering with intent’ around the place ready to be nabbed, bookings to have a one2one with a chaplain “for confession, personal prayer or a confidential ear” had to be made with the Conference administrator. The Conference acknowledged that London, a changing city, needs a changing Church, and the ‘aspirations’ addressed by excellent speakers were: Confident Discipleship, Creating Compassionate Communities, and Creative Growth. The question ‘Do Church and Strategy Mix’ was ably dealt with by the Director of the Strategy and Development Unit of the National Church Institutions. After each lecture the speakers were interviewed by a team of impressive young people. Stuart emerged from his cell ‘Zoomed out’ but inspired as we at Mucknell prepare for what God might ask of us as our neighbourhood changes with the building of the new town – Confident Discipleship, a Compassionate Community and Creative Growth!”

Meanwhile Gregory was Zooming-in on an Inter-Novitiate Study Conference that in pre-Covid days was held at the Franciscan friary at Hillfield in Dorset. Canon Rowan Williams gave a talk on St Clare, and Dr Peta Dunstan, author of This Poor Sort: History of the European Province of the Society of St Francis, gave a potted history of Franciscan communities within the Church of England.

23rd May, Feast of Pentecost – Happy festa to all reading this today. This morning we had a beautiful Eucharist led by Br Stuart, which included a haunting introit by Gregory and – for the first time – a blessing with the Oil of Chrism. You can read more about the significance of this in Br Stuart’s sermon (click here to download).

The last week has been quite a busy one. Yesterday was the last day of Painting Week, which for most of us involved applying a lot of brilliant white emulsion to walls that, while no longer brilliant, were white enough to make it something of a guessing game. Our approaches to this were typical of an activity that, unlike any other, separates the Perfectionists from the Good-Enoughs. As a staunch Perfectionist I’m naturally disdainful of the great mass of Good-Enoughs, but I’ll admit they have some persuasive arguments to make in their defence: their enjoyment of sanity, the brevity of life…&etc. There is of course a third class of decorator, but ‘it is better to keep silent than to speak of them’ (Rule of St Benedict, Ch 1).

During those moments when it wasn’t raining – and even when it was – Sr Alison and Sr Jessica had the tricky task of Osmo-ing the greenhouse, which suffers from a lack of right-angles. Meanwhile Br Stuart and Br Adrian set about restoring an old, rusty workbench that has been sitting in a friend’s garden for many years. The work on the bench is still on-going, but so far they’ve wrought an astonishing transformation.

On Friday we welcomed Obum and Demarius to Mucknell. They are the first overnight guests we’ve had since the pandemic began. Obum, an Anglican from Nigeria, is a member of the Community of St Anselm (COSA). Each cohort of COSA get a chance to spend some time living in an Anglican Religious house to deepen their experience of the life, and over the last five years (though not sadly in 2020) we’ve had the privilege of hosting young Christians of different denominations from all over the world, all exploring God’s call in their lives. Several have now become good friends of the Community, and none more so than Demarius Walker, who has returned for a third visit. Demarius has recently graduated from Virginia Theological Seminary with an MA in Christian Formation and has spent several months living with our brothers at Holy Cross monastery in New York. He is looking forward to continuing his studies at Boston University.

As of yesterday morning all the brothers and sisters in the Community have been vaccinated against Covid-19, with only a few us left to have our 2nd dose.

Finally, a reminder that the guest wing will re-open from 1st July. Br Adrian tells me that under current restrictions (we’re only allowing two overnight guests to stay at any one time) we’re already booked up until November. But there are still plenty of spaces available for Quiet Days and we will be evaluating our restrictions as the summer progresses; so watch this space!