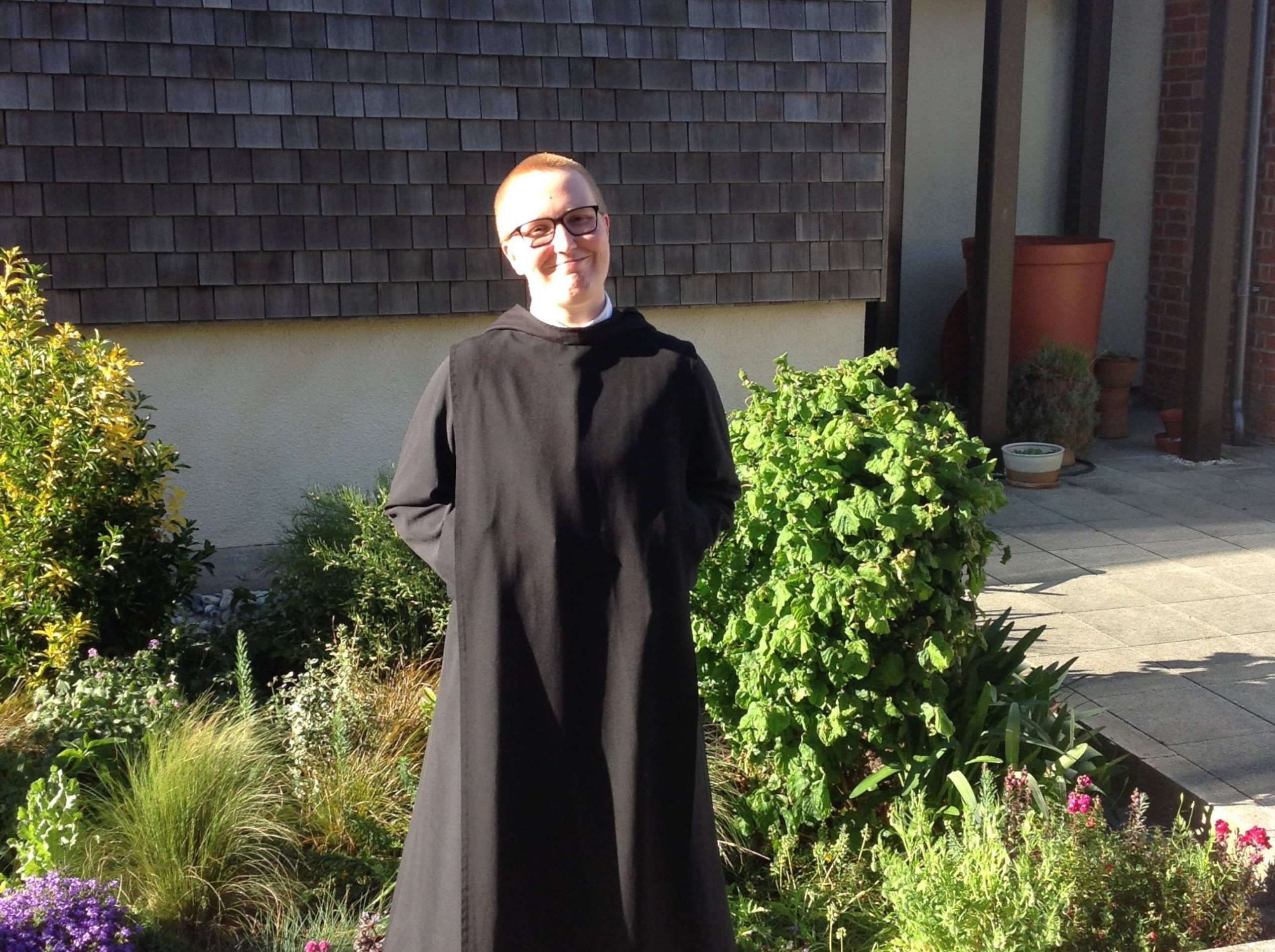 Posted at 09:34h in News, The Community by Br Jonathan

Sunday 3rd – Our last mealtime book was Sr Joan Chittister’s Wisdom Distilled from the Daily, in which she reflects on Benedictine spirituality and its relevance for the world today – or rather, its relevance for the world of the early 1990s. Last year she published a new book, The Time is Now: A Call to Uncommon Courage, and yesterday a friend sent me this link to an interview with Oprah, which you might want to check out:

Monday 4th – The other day I asked Br Stuart if he would write something for the blog, to try and make up for the long hiatus. Here are some of his impressions from the last few weeks.

“Silence since Easter. Whatever happened to Br Aidan? Was he with Kim Jong-un? No, he was in the archive, where he has been engrossed in trying to impose some kind of system on what is a very disparate collection of material. Do sermons belong in Liturgy or Formation? Some say they should go straight in the bin.

Easter morning – dry, relatively warm and curiously still as the Community began to gather outside the main entrance well before dawn for the lighting of the New Fire. An owl swooped down to see what we were up to and then proceeded to circle, hooting very loudly. I was too busy concentrating on what was happening with the Paschal Candle to notice the arrival of the second owl.

The weather during the Easter Octave was particularly lovely. On the Wednesday we had a picnic. We couldn’t go out and about as usual, so we took our Flora boxes to the hermitage. Here, sitting in a large circle, there is just enough room for us to observe a certain amount of social distancing. We then scurried back to sing None in the Oratory.

Above you can see the blossom in our apple orchard. Beyond that there is the plum orchard. How to get the tractor mower as near to the trunks as possible? Reverse towards the trunk. Good idea. But watch out for the branches at eye level. I didn’t, and a blossom-laden branch flicked off my spectacles and niftily flipped them in the direction of the large rear tyre of the tractor just in time for it to roll over them and before I could apply the break.

Talking of breaking, Br Aidan and Sr Jessica are both learning to drive. Jessica is well-advanced and simply held up by the lockdown. Br Aidan and I spent a merry hour driving from the farmyard to the cattle-grid in various configurations, now backwards, now forwards. Not once did I have to apply the non-existent break on the passenger side.

Br Michael and Br Aidan were due to fly to the United States on Low Sunday to spend a week with the SSJE Brorthers in Boston, but of course that wasn’t possible. Lydia was also due a break and had to make due with a few days of torrential rain in the hermitage – and loved it!

Having had the experience of clearing the diary of meetings and pastoral support sessions etc., several of us have found them creeping back in the form of Zoom or Microsoft Team meetings. But it is a chance to learn new skills. I wonder how many of them will move permanently online?

Now May is here and we are about to launch into a week of painting and decorating – planned many months ago when we knew we would have the help of a group of members from the Community of St Anselm. But the would-be decorators are locked-in at Lambeth Palace, where they’re having a month-long retreat instead.

We are hugely grateful for our 40 acres and wonderful views, as well as for the opportunity to continue the normal rhythm of monastic life, and are very mindful of so many in the world who are having such a tough time at the moment”

Friday 8th – I’m writing this from my dad’s house in Northumberland. He has recently been in hospital and asked for me to go up and look after him while he recovers from at least one of his ailments. As I can’t drive and I didn’t want to risk catching anything from public transport on my way up – he has a lung disease, after all – Sr Sally and Br Michael very kindly offered to do what turned out to be a 12 hour round trip from the Abbey.

The journey up was very easy. Our only difficulty was finding somewhere to ‘answer the call of nature’, as it’s put in our translation of the Rule. Modesty forbids me to say any more. When we arrived we decided to have our lunch (no Flora tubs this time) overlooking the sea at Cresswell, where we also said the Office of Sext. Yes, that’s right: Sext on the beach.

Below is a photograph I took before we shot off again. Druridge Bay is a 7 mile long sandy beach. At one end is a power station which originally powered a large aluminium smelter. This made an appearance in the graveyard scene in Billy Elliot, which was shot in the nearby cemetery at Lynemouth. The smelter has now been demolished, and one can hope that the station won’t be long in following it, That said, it does have a certain sublimity which isn’t entirely out of keeping with the environment. Right in the distance, to the left of it, you can just see the thirteenth-century century church of St Batholomew’s in Newbiggin. The original chapel is thought to have been built by the monks from Lindisfarne. At the turn of the last century it was still quite far from the sea, but gradual erosion has brought it to the very edge of the graveyard. I’ve only worshipped there once, but to hear the waves crashing against the rocks in the silences of the liturgy was quite something.

So I’m afraid there will be a further 11-day gap in the Mucknell Chronicles until I return home, which I hope to do so before Lydia is clothed as a novice and we celebrate the Ascension.

Monday 11th – Ignore that. It turns out I can be informed with what’s happening by email. And I’m bored.

I hear from the Abbot that painting week was a success. Inroads were even made into ‘Br Ian’s B-List’. How far, I cannot say. And who is to know, except Br Ian, whether or not there is a C-List? But it sounds impressive.

For those of you familiar with the guestwing, I have to inform you that the upstairs corridor is now…magnolia. Why this radical, devil-may-care departure from brilliant white? Well we didn’t do it on purpose. Only, if you’ve bought what you thought was brilliant white, and you’ve opened it, stirred it and are about to apply it, you’re sort of committed. But I can tell you it’s the last time we send the colour-blind Brother to B&Q.

Yesterday I walked over to the Church of St Mary the Virgin at nearby Woodhorn. It is conjectured that Woodhorn is the ‘Wudecestre’ granted to St Cuthbert by the former Northumbrian King Ceolwulf when he entered the monastery of Lindisfarne in 737AD. So far, the only thing I’ve been able to give my monastery is a Pyrex oven dish. Parts of the Church are certainly pre-Conquest, and additional wall foundations have been found underneath the medieval chancel. Originally the mother Church of Newbiggin (see above), it has been deconsecrated since 1972. Since then it has unfortunately been the target of occasional vandalism.

The crows were chattering loudly in the trees as I walked around the graveyard. Many of the stones bear old Northumbrian names – Ord, Fenwick, Hindhaugh, Charlton -, and there are memorials to the local gentry, the Cresswells of Cresswell. Of their Greek Revival mansion nothing but an elegant colonnade now remains, hidden in woodland a couple of miles further up the coast and daubed in Punk-dedicated graffiti. Many of the gravestones also bear moving testimony to the area’s early mining history: Thomas Beal, aged 10, who was killed in 1864 while playing on surface machinery; George Graham, a 45 year-old hewer who was killed by a fall of coal, and 17 year-old John Brown, crushed by a cage in 1860.

There was one gravestone I remembered from a previous visit. It belongs to Jens Christian Gustav Cock, who needless to say was not a local. After his name the inscription reads: ‘aged 26/Master of the brig Embla/of Christiana, Norway/This vessel was wrecked near Line/Burn on the coast of Northumberland/Jan 7 1854’. It adds that the stone was erected by an agent of Lloyds, at the request of the deceased’s brother, Emil. I discovered later that the ship had been carrying salt en route from Portugal to Christiana when it had got caught in a violent storm. It was eventually wrecked on a ridge of rocks three-quarters of a mile out to sea. The body of its young, ‘remarkably handsome’ captain, Jens, was washed-up on shore later that evening. He was found to be carrying twenty-five sovereigns, a few Norwegian banknotes, and a love letter. The body was taken to an adjacent farmhouse on the Cresswell estate, where the inquest was held and the ‘last offices of the dead carefully rendered’. The report ends by noting that ‘he was on Wednesday last interred in the little churchyard at Woodhorn, far away from friends and country’.

Afterwards I visited the cemetery nextdoor. It is awash with garish artificial flowers, and has none of the same charm. I was looking for the plaque put up in memory of my grandparents. It took some searching, but I eventually found it. We’re not a sentimental family to say the least, and I can count on one hand the number of times I’ve been to visit it. But I was pleased I did. Pleased too that it wasn’t marked with a silk posy.

“If you love one dead, then remember him lovingly, and learn from him, precisely as one who is dead; learn the kindness of thought, the definiteness in expression, the strength in unchangeableness, the pride in life which you would not be able to learn as well from any human being, even the most highly gifted…Remember one dead and learn in just this way to love the living disinterestedly, freely, faithfully… Remember one who is dead, and in addition to the blessing which is inseparable from this work of love, you will also have the best guidance to understanding life; that it is one’s duty to love the men we do not see, but also those we do see.” – Soren Kierkegaard

Thursday 21st, Feast of the Ascension – I returned from my nursing duties on Tuesday in time for Lydia’s clothing as a novice, which took place yesterday afternoon in the Chapter Room. Lydia had decided sometime ago to take a name in Religion and will now be known as Sr Gregory. After Vespers we had a small celebration in the courtyard with some enhanced refreshments, where Sr Gregory found out what it’s like to wear a black cotton/polyester habit on a hot day.