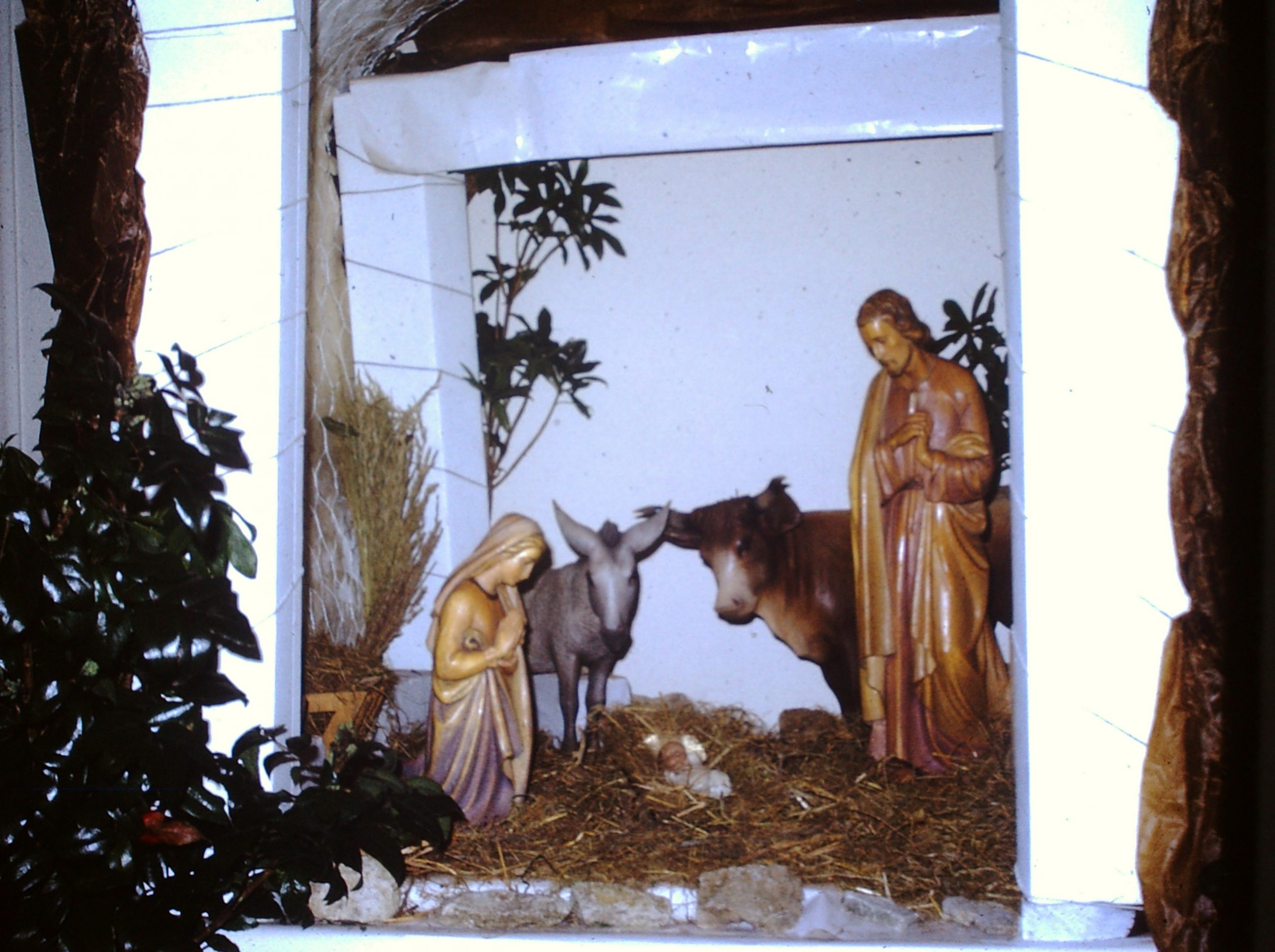 Above: The Epiphany crib at Burford Priory in 1970

2 January – A very happy New Year to everyone reading this. Let us hope that this year, taken as a whole, will be a little less grim than 2020.

Today life at the monastery returned to normal – or a closer approximation to normal – after an enjoyable Christmas Octave. Even though we’ve now been without heating or hot water for the last four or five days everyone is in good spirits. I’ve become an evangelist for icy cold showers, which as a quick Google search will tell you are very good for your physical and mental health. I reckon 50% of this is a sudden rush of smugness to the head.

This imitation rubber duck is (was) our first Christmas piñata. At the time the photograph was taken, shortly before its destruction, its belly was filled with Quality Streets.

It was Sr Sally who first came up with the idea, and despite some reservations subsequent research shows that it’s actually a perfect monastic activity: the stick used to beat the piñata is said to represent the triumph of love over the seven deadly sins, and the outpouring of sweets symbolises the forgiveness of sins and new life.

Br Adrian delivered the fatal blow, although next year contestants (who are blind-folded) will be banned from locating the piñata with their stick before they hit it!

4 January – This morning we were still without heating and hot water, and for reasons beyond my ken the toilets stopped flushing. But there was an outbreak of rejoicing at around 10am when the Calor gas truck pulled up with oil for our backup boiler. Many thanks to the friends who dropped off electric heaters and helped to keep us functioning.

Already there is a little voice whispering in my ear, ‘just one hot shower…’.

24th January – As you might expect, its been a quiet few weeks here at Mucknell. We’re behaving like ‘proper little monastics’ as Br Stuart puts it, living an almost fully enclosed life. Any contact with the outside world is being mediated via Zoom, which I have successfully managed to avoid on all but one occasion. Last week Sr Gregory took part in an online inter-novitiate conference led by Fr George Guiver CR (Mirfield), which covered the history and spirituality of the Eucharist and Daily Office. She was joined by novices from Mirfield, CSMV (Wantage), Society of St Francis (Alnmouth), the Sisters of Bethany and the Society of the Sacred Cross (Tymawr), and writes that ‘many of us were meeting one another for the first time, and it was a joy to spend some time with peers from other communities as well as expanding my understand of worship’.

Meanwhile Br Matt, who is staying with us for several months, has been using Zoom to teach marine navigation to students from around the world. I wondered what people thought about being taught marine navigation by a monk in Worcester. ‘It is a little bit eccentric, isn’t it?’ he said.

This week we celebrated the birthdays of Br Jonathan (me), Sr Sally and Br Stuart, whose birthday is today. Our combined ages are 178. I won’t reveal how that divides up, but my contribution to the total is very modest…

26th January – Having said to was a quiet few weeks it seems Br Stuart has been quietly taking part in all sorts of events in his basement hideout. He writes:

“As a self-confessed social media dinosaur I continue to be surprised as I explores the world of ‘Zoom’. Not having to travel to meetings has not only saved the Community a small fortune but also renders me more available for the laundry and kitchen (!!!) Recently I met with eleven members of other Religious Orders from different European countries for an evening’s ecumenical Zoom meeting. Earlier this month, sitting in my cell in the monastery, I led prayers at the Zoomed ‘Service of Commitment’ for the new cohort of the Community of St Anselm at Lambeth Palace…and it suddenly dawned on me that I was being watched, listened to and prayed with by people on all five continents simultaneously. “He marvelled” !!! During the Week of Prayer for Christian Unity I was able to contribute a talk on prayer to a Zoomed ecumenical service in the North of England, again, from the comfort of my cell. My current challenge is preparing for two days of Zoomed ‘interactive teaching’ on Benedictine monasticism for the Community of St Anselm. Mercifully, technical help is on hand in the Community”.