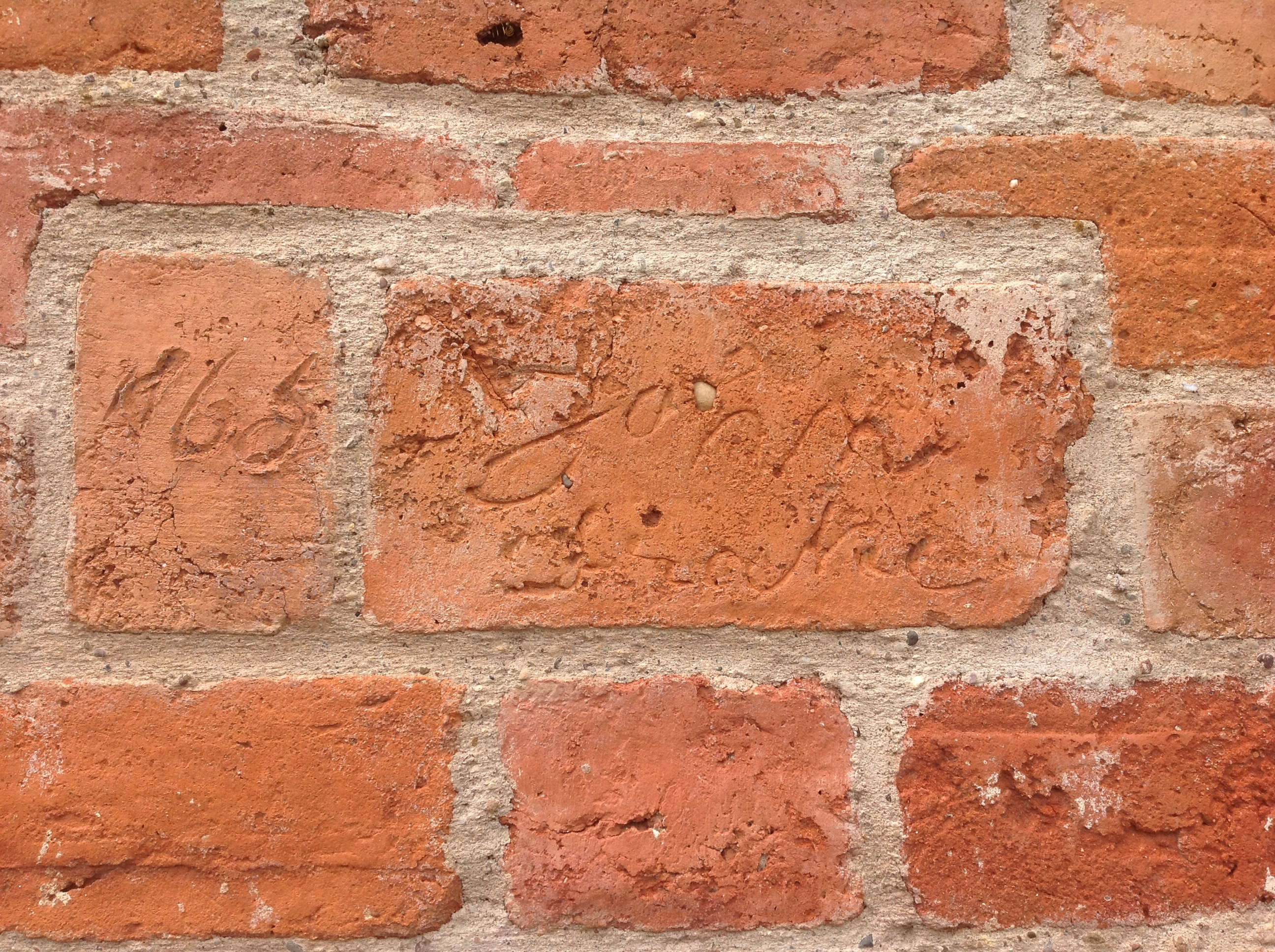 12 May The Builders of Mucknell

Posted at 16:10h in History by Br Jonathan

On Sunday evenings the Community has its only talking meal of the week (that’s not an oblique reference to cannabalism; it just means we aren’t in silence). Last Sunday we decided to sit outside in the courtyard and enjoy the sun, which doesn’t happen very often. It was then that I noticed that one of the bricks in the outside wall of the refectory was larger than the others.

I’m sure it doesn’t reflect well on our observation skills but that was news to most of us. In fairness you do have to get pretty close to be able to decipher the cursive script that reads ’65/John Drake’. In the conversation that ensued it was clear that none of us, not even Br Anthony, were completely sure what it signified other than the likely date of the farm buildings. But who was John Drake, and why was a brick with his name on it inserted into the wall?

Our previous home at Burford Priory had such a rich, well-recorded history. By comparison most of us know very little if anything about Mucknell. So I was spurred (in truth I need little encouragement) to do some research.

John Drake was sixteen when he inscribed his name on the brick, and working as a brick makers assistant at a brickworks in the adjacent parish fo Norton Juxta Kempsey, whose boundary runs along the north side of the Mucknell estate. By this time bricks were being made using newly-patented mechanised production techniques, such as the one developed by Humphrey Chamberlain of Kempsey, but a small country yard like the one at Norton was still making them by hand. I haven’t found any reference to it as yet, but it must have been a normal practice for the maker to date and sign each batch before it went into the kiln, and after it had spent a few months drying out.

John was born in Norton in 1849, the youngest of four sons of Peter and Ann Drake. Peter was an agricultural labourer, although his son would later describe him (perhaps more accurately) as a gardener. Norton was then described as a small, picturesque village, although the introduction of the railway when John was a child would have brought about a considerable change in its character and offered new opportunities to families like the Drakes, who had worked on the land in Norton for several generations. Both the Great Western and Midland ran lines through the parish and a station at Norton was opened in 1850.

There was a parochial school at Norton and free schools in nearby Kempsey and Stoulton, and John obviously received enough education to be able to write. But his working life started no later than the age of twelve, when he joined his older brother Edward at the brick works. The Brick and Tile Works at Norton

Having done a fair amount of digging lately I can testify that the ground in this area is, to say the least, clayey. It is also rich in lime.  Although it is a curse on all flower-bed creators, this makes it perfect for the manufacture of brick, tiles and mortar. At one time kilns would have been a common sight on the landscape, and scorched earth imprints were found on our estate during the building of the Abbey. The field opposite the white house at the entrance to the Abbey was also once the site of a clay pit. The white house itself, now Hill House Farm, was once the labourers cottages and probably date from the 1870s.

Although there was clearly a brick and tile works at Norton for most if not all of the nineteenth century, I have not been able to locate its precise whereabouts. There is still a Brickyard Cottage just to the west of the M5 flyover, and this appears to be on the same site as the brickworks which appear on an O.S Map from 1905. But there is no evidence that they much pre-date this. They don’t appear on the 1884 edition. I am hoping that earlier maps in the Worcestershire Archives will yield some more definite information, so I won’t bore you with a tentative theory.

When the Drakes were first hired the brickworks was probably still in the ownership of James Wall. In the mid-1850s Wall lived at Lower House on Woodberry Lane. As a wharfinger, Severn carrier and coal merchant he had extensive business interests in addition to brick manufacturing. His interest in the works was probably taken over from malster and hotelier John Jeremy (see advert), who emigrated to Australia sometime in the early 1850s. Wall retired from business sometime before 1861 and his young nephew, Herbert Cresswell, moved into Lower House and took over the running of the works. Employing only four men and two boys (the Drakes), some of whom must have engaged elsewhere to keep him in business as a coal merchant, it would have been a very small operation. Advert from Lascelles & Co. Directory for Worcester and Neighbourhood (1851)

As the map shown below from 1838 indicates, before the 1860s Muckenhill/Muck Hill (as it was then known) consisted of a farmhouse and a number of outbuildings scattered around the summit – if we may call it that – of the “hill”. The farm was 200 acres in extent and made up of arable, dairy pasture, meadows and orchards. It formed part of the Stoulton estate of the 3rd Earl Somers, whose family acquired it in the seventeenth century when its then owner, a Royalist named Sandys, was ‘compounded for delinquency’ by the victorious Parliamentarians. In or around 1860 the lease on Muckenhill was acquired by George Quarrell, although it quickly passed to his brother Thomas (d.1867). The Quarrells were farmers from Pensham near Pershore, although before taking on Muckenhill the family had farmed upwards of twenty years at Kemerton in Gloucestershire. In what constituted a major investment Thomas Quarrell built himself new farm buildings according to the principles of the so-called ‘model farm’, and it is these that now serve as our refectory, guest wing, library and offices. Model farms were planned along scientific and industrial lines and replaced the kind of “inefficient” farm structures which, until the agricultural innovations of the eighteenth and nineteenth centuries, had grown-up in a piecemeal fashion.

The 1861 Census entry for Muck Hill, showing Thomas Quarrell and his wife as farmers of 200 acres employing 3 men and 3 boys. Theirs was a late marriage – they were both in their mid-to-late forties and they had no children. Living with them are his nephew Charles Best, niece Kathleen Harrison, a general servant and a 16 year old cowman named James Houghton from Pershore .

An archaelogical report carried out before the Abbey was built found two bricks marked with dates: the one in question from 1865, and another from 1863. Others had illegible names inscribed on them. Sadly these now appear to be lost. But it gives us an approximate date for its construction. We now know where the bricks came from, and we can be fairly sure that the mortar came from the lime kilns at Norton owned by George Watson.

One thing which had puzzled me from the beginning was why Quarrell would have inserted a brick, and in a fairly prominent position (*cough*), inscribed with the name of a brickmaker’s assistant? Well it transpires that not long before the construction of the Abbey the range had undergone extensive restoration by its former owners, and at that point the bricks were discovered and re-set.

John continued to work at the brickworks until the end of the decade, by which time he had been promoted to foreman. We know this because in 1869 he took the then owner, Thomas Collins, to court for unduly witholding wages (more on this to come). Not surprisingly, by 1871 he and his brother were working elsewhere. Edward had moved into the city and was working as an inspector of railway engine, while John stayed at home and worked to provide for his parents. His father was by now old and infirm – he died in 1873 – and it’s possible that he took over his job. He is recorded, like the majority of men in England at this time, as an ‘Ag Lab’.

By 1880 John had left Norton, leaving one to wonder why he didn’t stay to support his mother, who at seventy-three was living at Newland Farm as a charwoman. But presumably seeking better prospects he had joined his brother on the railways, working as a driver on the Stonehouse to Nailsworth line. At Stonehouse he met and married his wife, Sarah Jane Ford, with whom he later had three children. After some time in Avening and Nailsworth the family settled into a suburb of Gloucester, where John worked as a driver for the Midland Railway Co. until his own retirement.

The entry for John Drake’s marriage to Sarah Jane Ford.

He died in 1919 and is buried in the churchyard at Barnwood, Gloucester. He left an estate valued at £93 4s.