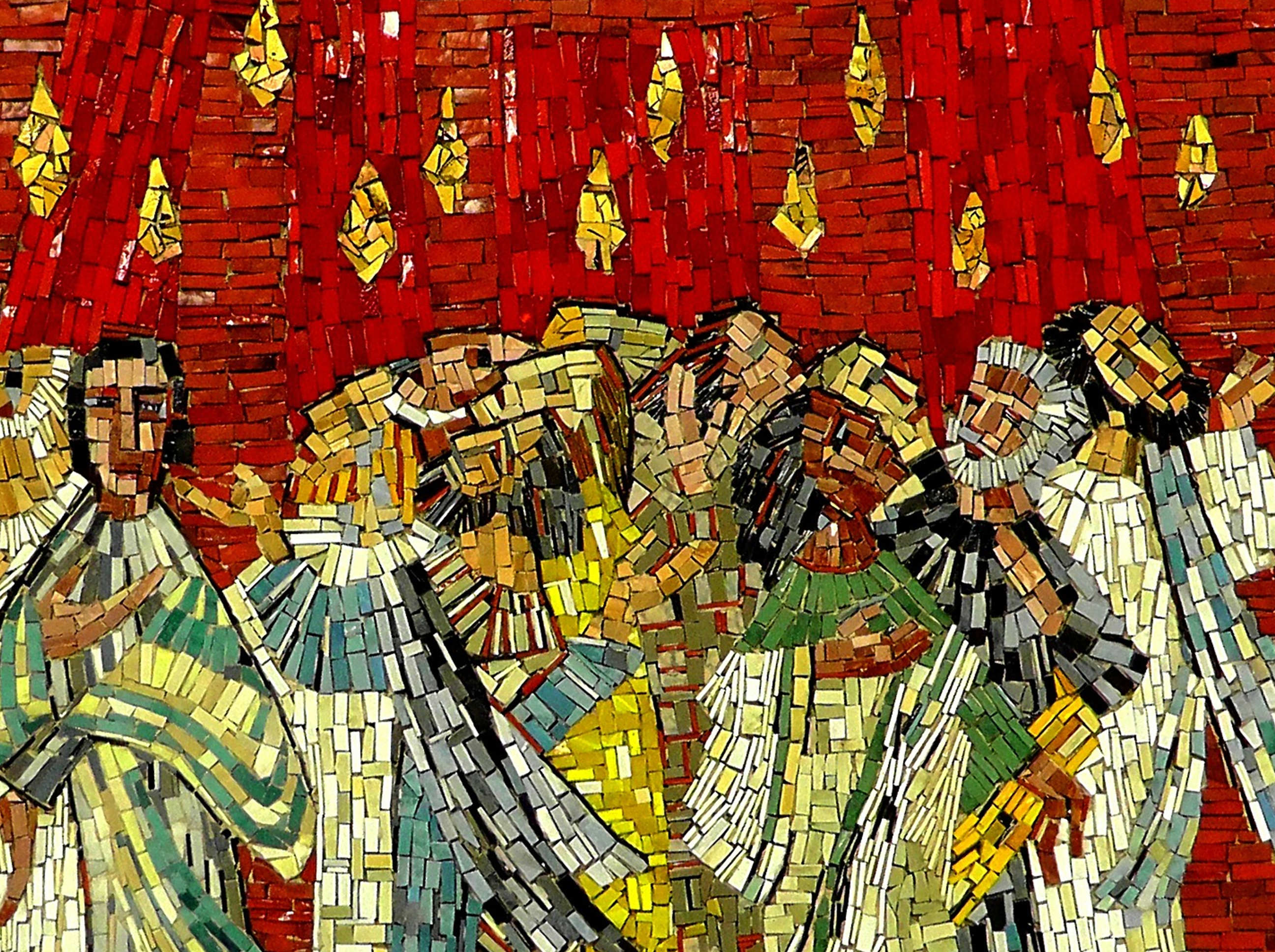 26 May Br Stuart’s thoughts on Pentecost

Posted at 15:48h in Poetry, Prayer and Meditations by Br Jonathan

One of my friends was 50 a few weeks ago. The day of her birthday was celebrated in a modest style. What she didn’t know was that her husband and children had organized a huge surprise party on the following Sunday.”I was completely in the dark about it” she said, “but now I can see all sorts of things that should have alerted me to the fact that something was afoot. I just couldn’t see.”

When the penny finally drops we say: ‘Ah! Now I see’. We have understood a concept, not seen a visible object.

The Buddha, when he gained enlightenment said: “There was light”… and Jesus said, “I am the light of the world.”  And, of course, in English we have the great pun Son and sun – the source of light.  The Christ-light symbolised in the Paschal Candle … and all the dozens of other candles with their flames, lighting otherwise gloomy churches,  hinting at the Pentecost story when Luke describes the coming of the Spirit in terms of flames of fire and wind.

What struck me forcibly for the first time this last week was how I have tended to take Luke’s account of Pentecost very much at face value, without realizing that he was trying to describe the indescribable; he hit on these images of flames – giving light, enlightening – and wind – disturbing, invisible, getting through every chink in our defences – filling all things. They are amazingly dynamic images if we let them live, as Charles Williams did in his play The Terror of Light.

In his description of the coming of the Spirit on the Apostles he takes language to breaking point as he tries to articulate what he sees.

Words pouring out as he tried to articulate what the disciples had experienced – what they had glimpsed, intuited, understood – now that they were no longer in the dark. At last they could see what Jesus had been banging on about. Out they went, empowered by the Spirit – the fire of the Spirit burning in their hearts. The infant Church was established and began to grow. But then came the struggles and the arguments and the realization that there was more to following Christ than they had first understood. They had actually to follow the path Jesus had trodden with all the misunderstandings, the heartaches and sacrifices. All Jesus’ prophecies about being hauled before the courts and so on began to come true. Stephen was stoned to death and the persecutions began. People who had been enthusiastic at first cooled off. For many doubts and weariness set in … just as they do with us today.

And that’s where it is important to remember the other image – the wind. Wind can do one of two things with a flame; it can fan it into a raging inferno, or it can blow it out; and if we are honest, sometimes it feels as if our flame has been blown out and there is a definite icy chill to the wind. Then the temptation is to give up in despair. This is when it is important to remember that the Spirit is in the wind. However much we feel out in the cold and the dark, what Pentecost tells us is that we are still very much in God. This is the dropping of the penny – the dawning of the realization that Jesus wasn’t just the Jewish Messiah but the cosmic and eternal Christ, and that for all time his disciples – and that includes us – are caught up in Christ, in the life of the Godhead.

After he had had a terrible time Paul was able to go on and say: Christ fills all things – even our gloomy or ghastly moments, even the situations when things seem impossible, or the cost too high. The whole of creation is in God, every scrap of it, and it is loved and sustained by God.

Part of the ‘Ah ha! Now I see’ of Pentecost is the glimpse into the co-inherence of all things – a truth which, at least in part, is beginning to dawn on our secular society as we become more and more aware of the wonderful but fragile balance of the earth’s eco-systems and our responsibility to steward creation well. But it’s more than ecological responsibility, it’s a deeply spiritual reality.

If once we glimpse that the whole of our life is caught up in God, and that Jesus is calling us to follow him – to live the Christ-life – to put into practice in the humdrum details of our daily existence, the precepts he taught, life can never be the same – or can it? Perhaps it can, all too easily … as we reach for our slippers and turn the telly or the computer on and drift off to who knows where. It’s all too much and we prefer a quiet life. I remember the words of Richard Holloway:

“We want a quiet life, the life of the graveyard, where little happens, but where we can water the flowers, and gaze at the gravestones, and remember the past with affection. BUT our God is a grave-buster, a tombstone roller, a wandering God, calling us to leave the graveyard and to follow him to Galilee. To be a Christian we have to resign ourselves to an exciting life.”

… and the more we follow the Risen One, the more the Holy Spirit will reveal of the great mystery whom we call God; and the more we will recognise the hints of his presence, his working, in all the details of life – and in each one he is inviting a response: to live as Christ – or not. To live with that sensitive, compassionate love we see in Jesus – with that love that spent itself for those who didn’t seem particularly interested in the deeper things of life – or not.

And, of course, the wonderful thing is that even when we have resolutely put our slippers on and decided ‘not’ ~ the invitation is always there to change our mind and say ‘Yes!’ in the next moment.Our forgiving God gives us each fresh present moment to start again, unhindered by the failures of the past: Pentecost reminds us that we too have that power of forgiveness – to set people free to start again – and that’s a huge privilege as well as a huge responsibility, and to exercise it, we need the grace of the Holy Spirit, healing us of our hurts and fears, and freeing us to minister healing and forgiveness to others…and to help the ‘penny to drop’ for them too.

Ann Lewin has a little poem we might pray:

Flame-dancing Spirit, come,
Sweep us off our feet and
Dance us through our days.
surprise us with your rhythms,
Dare us to try new steps, explore
New patterns and new partnerships.
Release us from old routines,
To swing in abandoned joy
And fearful adventure.
And in the intervals,
Rest us,
In your still centre.