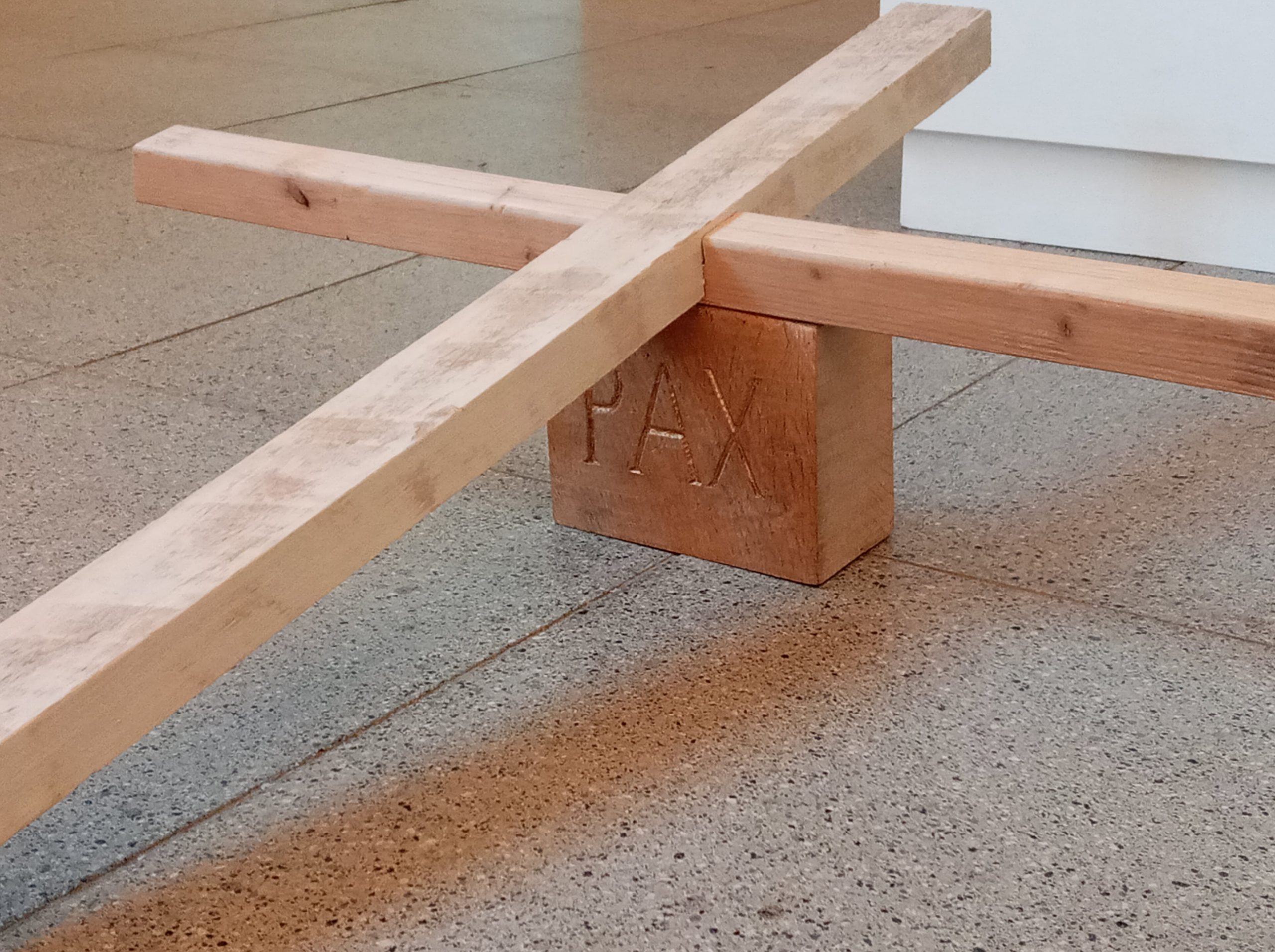 Easter Monday – Several months ago Abbot Thomas created a small working group to produce a Methodist Easter Vigil service. In previous years, at least during our time at Mucknell, the celebration has been presided over by Br Stuart or Sr Alison according to the Anglican rite. One of the things the group were keen to do was to simplify the service without losing some of its most important symbolism. So no brocade, no thurible, no deacons, and a minimum of fancy footwork. And hopefully less tension.

I’m pleased to say the whole thing went beautifully, and many of us found it a very contemplative experience. It was an early start as usual. Most of us were up by 4.30am. Although it was a bit nippy the sky was clear and calm, ‘painted with unnumber’d sparks’, and the silence was broken only by owls tooting in the woods. I couldn’t help reflecting on how much we will lose when we’re surrounded by the new town.

This being the second year without guests there was no need for an 11am Eucharist, so we enjoyed a spacious morning before lunch – that is to say we walked around aimlessly with cups of coffee in our hands and vacant expressions on our faces. Unfortunately Sr Sally and Abbot Thomas had to oversee the production of a lamb roast. I also cajoled Sr Alison into doing some laundry with me. At one point she was heard muttering to herself “What did you do on Easter morning Alison?”…”The towel round”.

The first part of the afternoon was given over to napping – or so I imagine – before we gathered for tea. This year we found ourselves watching the Oxford-Cambridge boat race, which may not have been everyone’s first choice of entertainment, but Abbot Thomas, Sr Jessica and Sr Alison had a vested interest in the outcome. In case you don’t know, Cambridge won both races. Abbot Thomas was crestfallen, but Br Ian encouraged him to look on the bright side: ‘at least you made second place’.

Sr Sally outdid (overdid?) herself this year with the Simnel cake. It was so decadent I’m almost too ashamed to publicise it (alas, not ashamed enough). When the chorus of astonishment subsided someone thought it would be amusing – and it was – to ask Br Michael, our theological hardliner and resident ascetic, what he made of it. After a long pause he replied ‘…preposterous’.

Sunday 11th April, Low Sunday – This is the last day of our Easter Octave. This year’s has been particularly low key. A few of us made it out to nearby Bredon Hill on Tuesday, and just about managed to avoid the rain and sleet. On Friday we delivered Br Michaël’s largest commission to date, an icon of St John Climacus’ Ladder of Divine Ascent (see below), to its new home in Oxfordshire. Our hosts provided us with a wonderful al fresco lunch, and contrary to BBC Weather’s gloomy prognostications we came away with sun-burnt skin. There were two nights of entertainment, including a showing of Autumn de Wilde’s Emma (2020). Again, not everyone’s cup of bohea tea. A good occasion to practice the monastic wisdom of wanting what you get rather than getting what you want.

Saturday 17th – We gathered in the Community Room to watch the BBC’s coverage of Prince Philip’s funeral. We were pleased to hear the choir sing the Kontakion, which we sing at the graveside of our departed brothers and sisters.

Sunday 18th – We celebrated the “official” birthday of Br Michaël, which this year fell on a Quiet Day (the 19th). A week ago (see entry for Sunday 11th) we delivered what he describes as his ‘most ambitious’ icon commission to date, John Climacus’ Ladder of Divine Ascent. After a few gentle reminders he has sent me a photograph to share with you, as well as an extract from a recent journal article he has written, in which he talks a little about the icon and its subject. I’m currently reading Dante’s Divine Comedy (I’ve almost made it to Purgatory) and it doesn’t surprise me to learn that St John Climacus is cited as an influence on his work. Like the Comedy, it ‘probes man’s [sic] soul…incit[ing] him to transcend the maelstroms of the surrounding reality, and to ascend into the realms of higher truths’ (a quote from Archbishop Damianos, quoted in Karampetsos, Dante and Byzantium).

My latest and most ambitious commissioned icon of St. John Climacus’ Ladder of Divine Ascent is a subject dear to me. Though very well known in the Orthodox Church and being read still today especially during Lent, the Ladder of Divine Ascent, written by St. John Climacus (579-649, monk of what is now known as St. Catherine’s monastery on Mount Sinai) is not as common in the Western Church but is a treasure. The use of a Ladder remains quite familiar in western spirituality, especially with St Benedict’s Ladder of Humility. In lots of ways, I think St. John Climacus and the author of the Rule of The Master, on which St Benedict’s rule is partially based, would get along quite well. The icon measures 110cm x 88cm and is on a Serbian gessoed panel with 23ct water gilding. As prototype and main inspiration, I used an icon from the Greek master iconographer Emmanuel Tzanes (who did most of his work in Venice) from the Cretan school, dated 1663. This particular icon from E. Tzanes, has some more “baroque” elements. I attempted in my drawing, to the best of my ability and with the support of Peter’s expert advice, simultaneously to bring this icon closer to works from the 15th century of the Cretan school and to emphasise elements of its theology while remaining within the canon. Though the Ladder is challenging and complex, I think it is well worth wrestling with the subject, its soteriology and its teaching about our day to day commitment to follow Christ our Saviour and King.

Wednesday 21st – After Conference we took part in a short rite to receive Sr Gregory back as an Alongsider. Over the last several months she has discerned another path of discipleship, and recently asked to withdraw from the novitiate. All going well she will return to the US in June. I’m sure she will appreciate your prayers as she prepares for this transition. We very much hope that this is still the beginning, and not the end, of a fruitful friendship.

Thursday 22nd – At the Eucharist today we remembered friends and family of the Community who have recently died, including Br Anthony’s brother, Chris Hare (1942-2021); Br Michael’s grandmother, Lucie Brossard (1938-2021), and my father Albert Clark (1945-2021). We also remembered Sarah Everard (1987-2021) and her family, who once showed me a great deal of love at a time when – as Dante puts it – I was in a dark wood and had lost sight of the right path. Give rest, O Christ, to thy servants with thy saints: where sorrow and pain are no more; neither sighing, but life everlasting.

Friday 23rd to Sunday 25th – Br Philip and Sr Sally were both thoroughly zoomed-out after their virtual attendance at (respectively) General Synod and the Anglican Religious Life Conference. On Sunday Br Stuart preached. Most of his sermon was taken up with Max Lucado’s delightful tale of the Wimmicks. You can read it here.